It can happen that the display output port or connector on your graphics card or video adapter does not match the ones on the monitor. For example, your graphics card comes with DVI and VGA ports, but the monitor has DisplayPort and HDMI ports. In such cases, you need some kind of display adapter or converter cable that can connect your graphics output to the monitor so that you have display output on your screen. You can also use these display converter cables and adapters to connect your laptop output to the monitor or projector. Display adapters and converter cables do work pretty well, but in some cases, they may face compatibility issues and fail to work with some devices or hardware. Also, some of them have some kind of limitations, which can restrict their usage. These display converter adapters and cables are available in different lengths, and quality, and some can work differently than others.

DisplayPort, HDMI, and DVI are digital ports/connectors and carry or transmit digital signals while VGA connector or port carries or sends analog signals. In some cases, the conversion between digital ports or connectors is pretty straightforward and can be done by matching and connecting the corresponding wires from one connector to another. On the other hand, the conversion of digital signals to analog signals or vice versa is a complicated process because it involves some kind of circuitry and IC chip that converts the digital signals to analog or vice versa.

The display adapters or converters that convert one signal to another without any extra power and active circuitry involved are called passive adapters or converters. It can be done by passing the same video signal from the source port to the destination port without any signal processing that involves decoding, encoding, and retransmission of the signal. However, passive adapters may contain a voltage level converter IC chip to convert the voltage level of the source port to be compatible with the output port. For example, DisplayPort’s native voltage is 3.3V, but DVI and HDMI work at 5V, so the 3.3V voltage signals must be converted to 5V signals for DVI and HDMI devices to work. 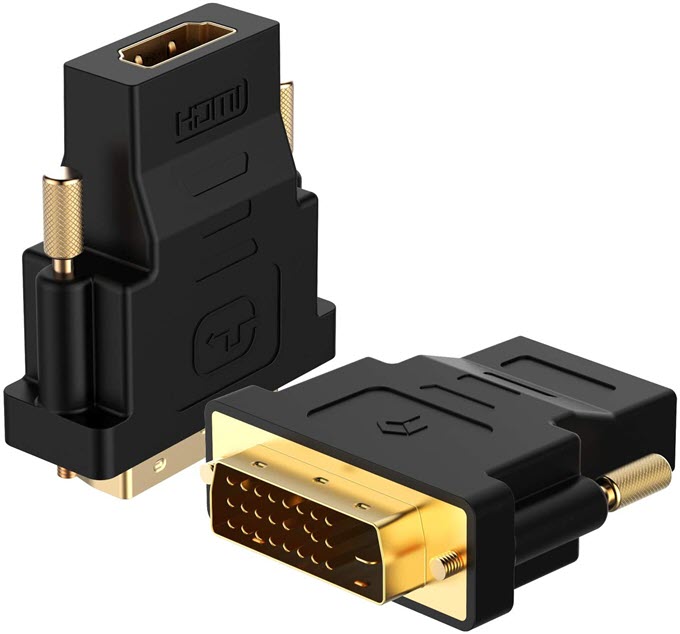 Adapters that use some IC chip and active circuitry for processing and conversion of one signal to another are called active adapters or converters. The chip and active circuitry decode, process, and retransmits the signal in the proper form for the input port. It is done to ensure maximum compatibility with older ports with power limitations, to boost the signal to deliver higher resolution and to support multiple monitors or devices, e.g., Active DisplayPort to HDMI Adapter. Active adapters are costlier than passive adapters, and some of the active adapters or converters do require external power, which can be provided through USB port or adapter. Conversion of signals from digital to analog port or vice versa can only be done by active adapters.  On the other hand, the transformation of digital signals from one connector to another can be done passively or actively depending on the adapter or port type. Below you can see an active adapter from the outside and inside. 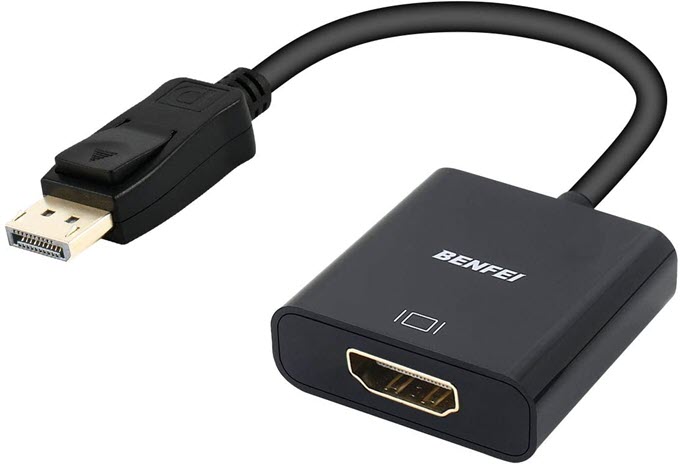 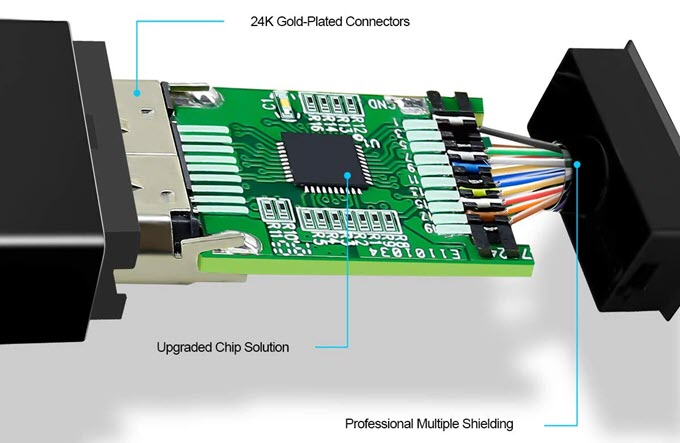 Inside an Active Adapter

Well, there is a small difference between adapters and cables that are used for the conversion of one display signal to another. An adapter is shorter in length and has a female connector at the output end. It may also contain an external power port for the active conversion of the signal. On the other hand, a cable is longer and generally has male connectors at both ends. The cable can be used directly with the output and input source.

Do these Display Converters/Adapters Work & their Limitations

Generally, these converters work fine, and rarely you may face compatibility issues with your computer or monitor. Some converters are limited to lower display resolution and refresh rates, and they won’t go beyond it even if the monitor and graphics card support higher resolution. For example, a converter can only support up to FHD or 1080p resolution@60Hz even if the monitor and graphics cards can output higher resolution or refresh rate. All these display converter cables or adapters are Plug and Play, which means you don’t need to install any drivers or software for them to work.

How to Find the best display converter cable or adapter?

You can identify a good display adapter or converter by looking at the quality of connectors, thickness of the cable, and wire material. A good converter has a thick cable with internal shielding and uses copper wires for data or signal transmission. Some of the adapter cable connectors are gold plated to prevent them from any kind of corrosion or oxidation. The construction quality of the connectors should be sturdy, and they should be made from good quality plastic. If you are buying an adapter or connector cable online, which most of you do, then read the reviews about the converter or adapter to check whether it works properly and is there any problem or issue associated with it. Choosing between active and passive adapters is a matter of personal choice and requirement, but a passive cable is generally more reliable than an active one. Some brands that offer good display converters cables or adapters are AmazonBasics, Cable Matters, CableCreation, StarTech.com, Moread, and Benfei. 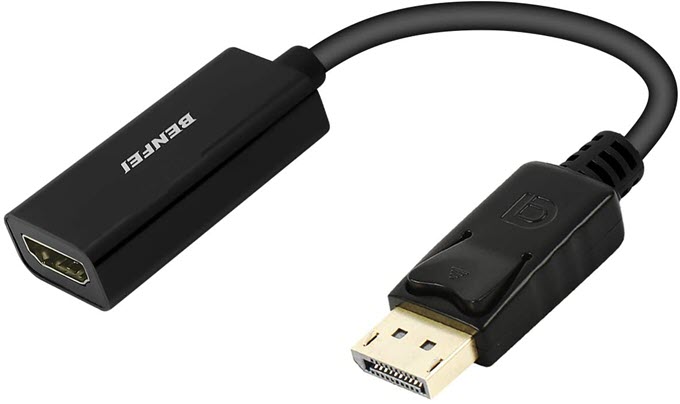 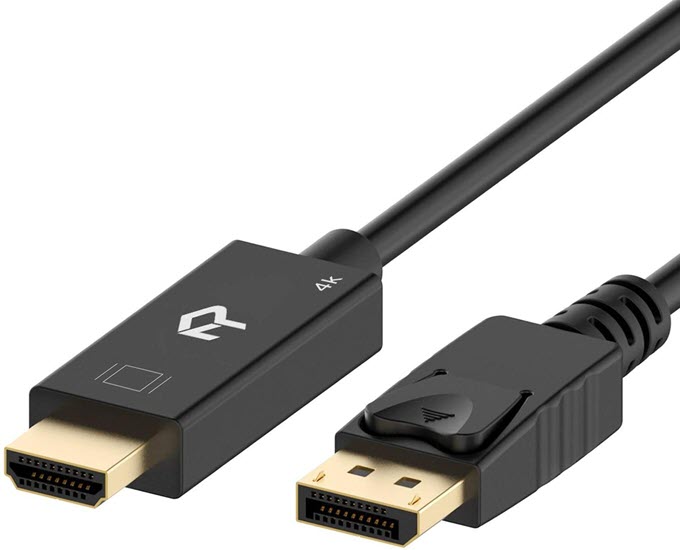 DisplayPort to HDMI Cables/Adapters you can Buy:

DisplayPort to DVI Adapter/Cable – It converts DisplayPort signal from graphics card or display adapter to DVI signal for monitor or projector having DVI port. These types of cables or adapters come in both passive and active forms. The DisplayPort to DVI adapters/cables can transmit single-link DVI only that limits the maximum resolution to 1920 x 1200@60Hz. 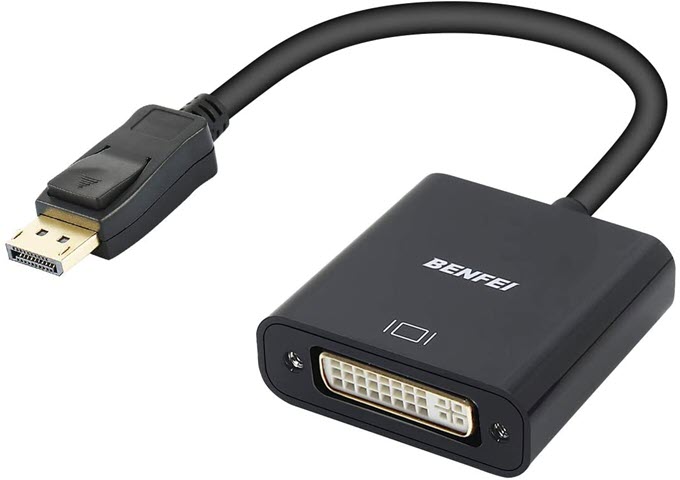 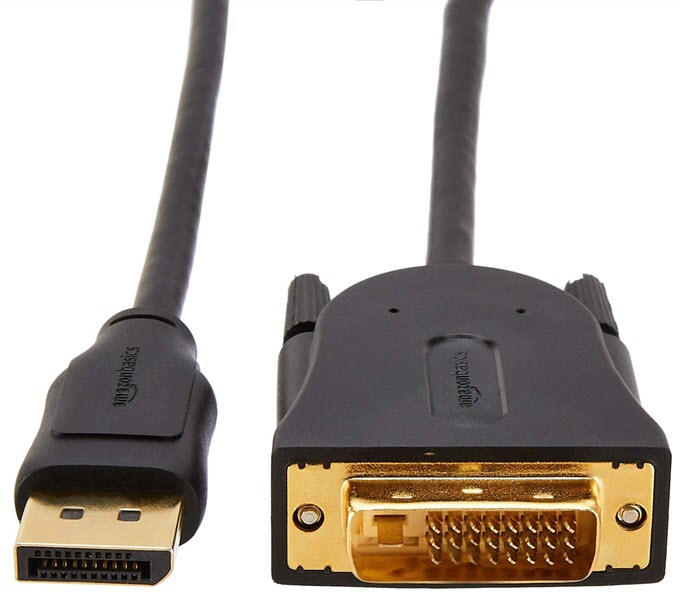 DisplayPort to DVI Adapters/Cables you can Buy:

DisplayPort to VGA Adapter/Cable – This type of adapter/Cable converts DisplayPort digital signal to VGA signal, which is analog. The maximum resolution supported by these adapters is 1920×1200/1080@60Hz. The conversion of the digital signal to an analog signal can be done only by the use of external signal processing machinery, so all these adapters/cables are technically active. 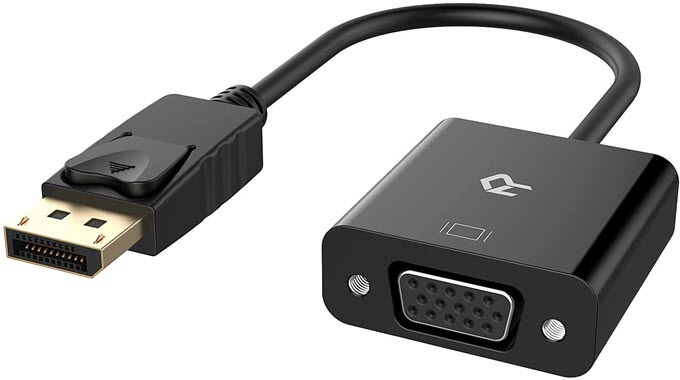 DisplayPort to VGA Adapter/Cables you can Buy:

These display adapters or cables convert HDMI signals to other types. 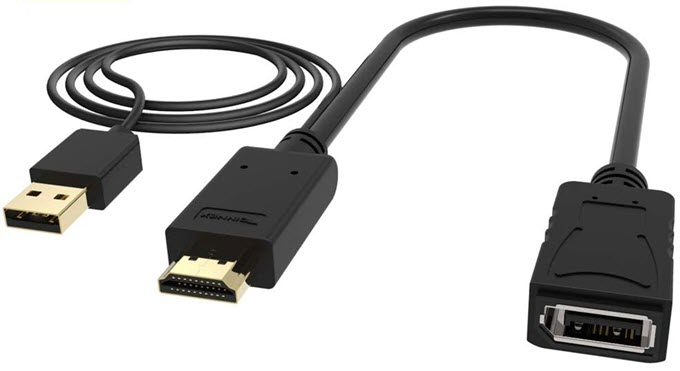 HDMI to DisplayPort Adapters you can Buy:

HDMI to DVI Cable/Adapter – HDMI and DVI signals are electrically compatible, and the conversion can be done passively without the need for any chip or circuitry. The HDMI to DVI cables or adapters is bidirectional, which means they can convert signals from DVI to HDMI also. The HDMI to DVI converters can transmit single-link DVI only, which means the maximum resolution is limited to 1920 x 1200@60Hz. 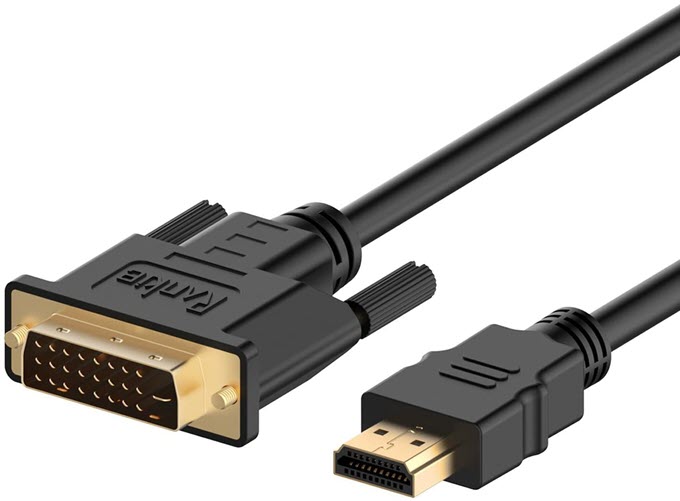 HDMI to DVI Cables/Adapters you can Buy: 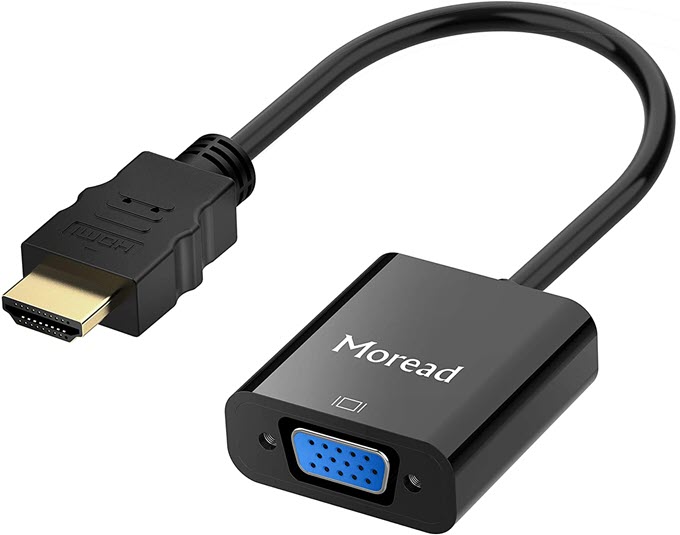 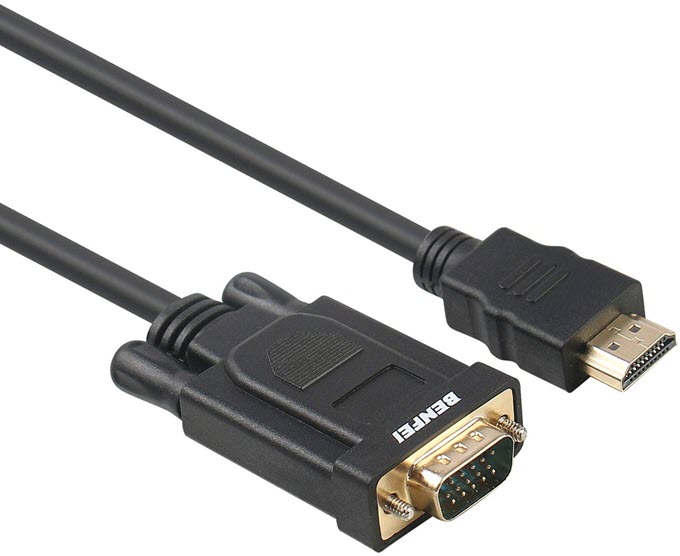 HDMI to VGA Adapters/Cables you can Buy:

These display adapters or cables convert DVI signals to other types. 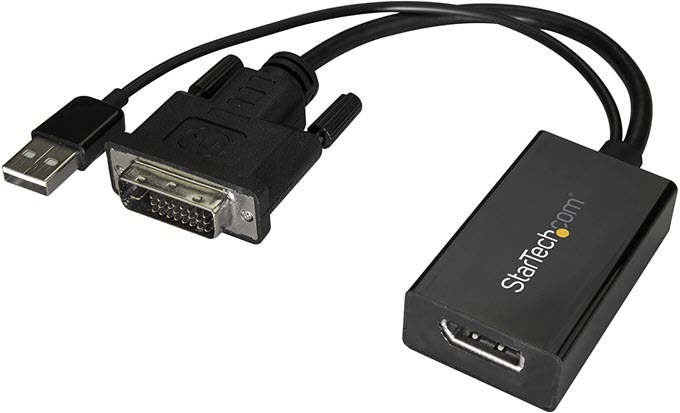 DVI to DisplayPort Adapter you can Buy:

DVI to HDMI cable – DVI to HDMI cables are the same as the HDMI to DVI Cables or adapters because they are bi-directional. The maximum resolution supported by them is 1920 x 1200@60Hz.

DVI to HDMI Cables/Adapters you can Buy:

DVI to VGA Adapter Cable – There are three types of DVI connectors, DVI-A, DVI-I, and DVI-D, and they use different adapters for conversion into VGA. DVI-A transmits only analog signals, and DVI-I transmits both analog and digital signals. They use passive DVI-I to VGA adapters or cables for conversion to VGA as the four extra pins in the DVI-I/DVI-A port provide the analog signal. On the other hand, DVI-D outputs only digital signals and requires an active adapter for conversion to VGA signals. The maximum resolution supported by active and passive DVI adapters is 1920×1080@60Hz.

Below you can see the differences between DVI-A, DVI-I, and DVI-D connectors. DVI-I has four extra pins that carry an analog signal, which is absent in the DVI-D connector. 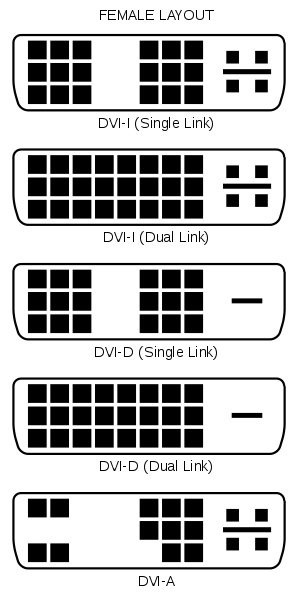 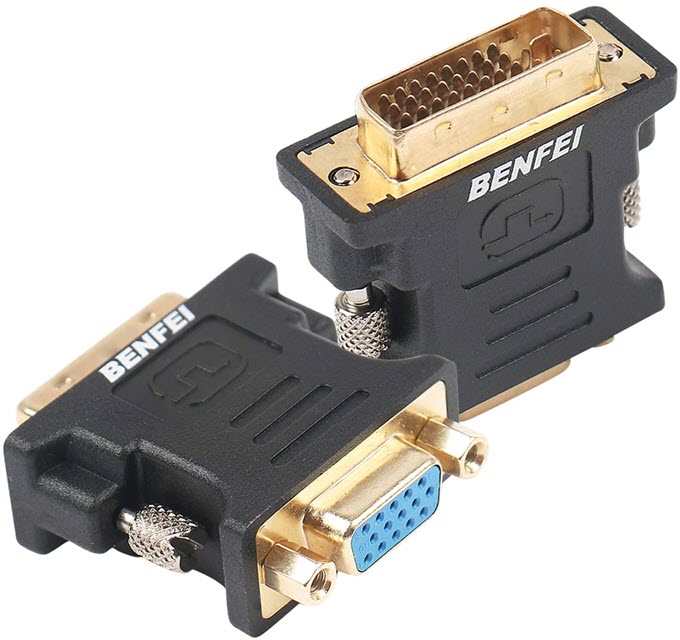 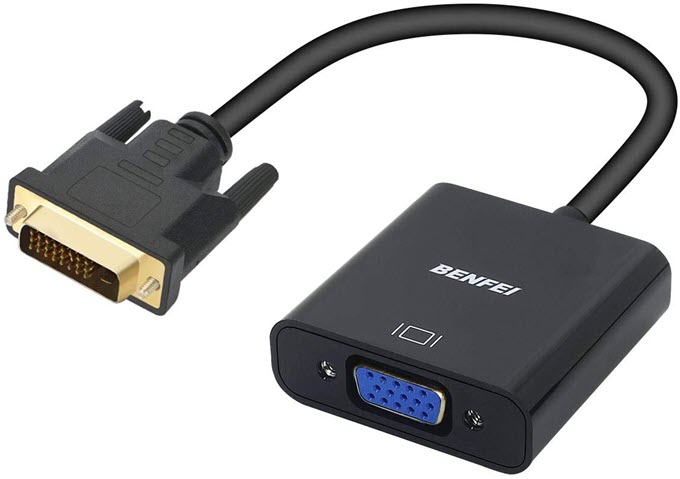 DVI-I to VGA Adapters/Cables you can Buy:

DVI-D to VGA Adapters you can Buy:

Conversion of VGA analog signals to other digital signals is a bit complex, and there are almost no adapters available for it. However, you can find an active VGA to HDMI adapter and it uses additional power from the USB port. Some adapters may contain a 3.5mm aux jack for transmission of audio to the HDMI port using the 3.5mm audio cable from the computer with VGA output.

VGA to HDMI Adapter – An active adapter that converts VGA signal to HDMI signal and uses external power from the USB port. The maximum resolution supported by such adapters is 1920 x 1080 @ 60Hz. Below you can see types of VGA to HDMI Adapters. 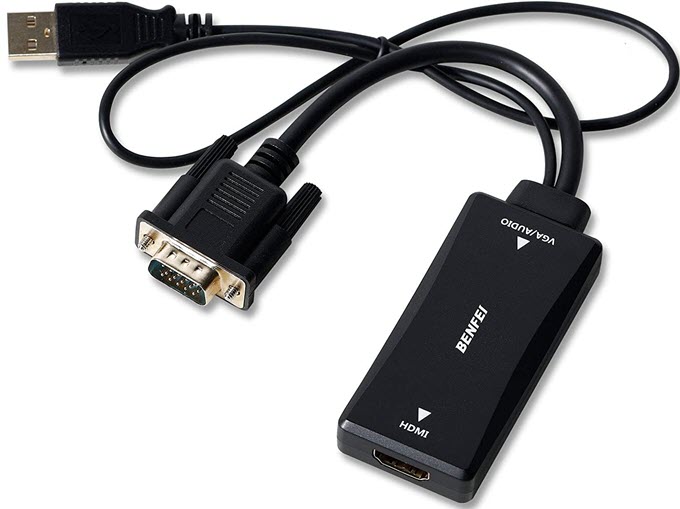 VGA to HDMI Adapters you can Buy:

Selecting the right display adapter or converter cable is very important because if you make a mistake, then you will end up wasting your time and money. So, if you have any confusion regarding them, then you can ask your queries in the comment section below. 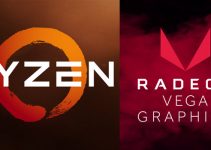 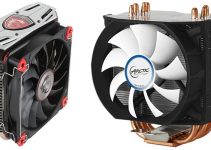 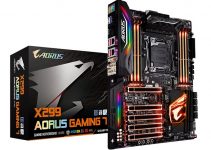