If you want to run NVMe SSD on an older motherboard or on a budget motherboard that lacks M.2 slots, then you need an M.2 PCIe Adapter for it. It is an expansion card that plugs into the PCIe slot (x4 or higher) of your motherboard and has an M.2 slot for inserting the NVMe or PCIe SSD in it. There are M.2 PCIe Adapters with multiple M.2 slots, but they require a PCIe x16 slot that operates at full x16 bandwidth. Moreover, some of these M.2 adapters support both NVMe and SATA M.2 solid state drives by having separate M.2 slots for them. The M.2 PCIe adapter may also come with a heatsink for NVMe SSDs for cooling because they generate a lot of heat during heavy loads. An M.2 PCIe Adapter is also known as M.2 PCIe Expansion Card or M.2 to PCIe Card. 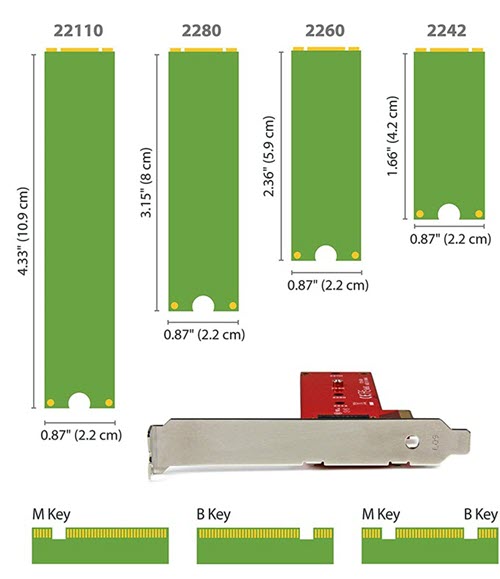 Well, the main purpose of installing an NVMe solid state drive is to speed up your OS performance (especially Windows 10) by configuring the M.2 SSD as a boot drive. If you want to boot your OS from an M.2 SSD installed onto the PCIe Adapter, you have first checked whether your motherboard/BIOS supports booting from a PCI-E device/ NVMe SSD. Otherwise, you have to use it as a non-boot drive for storage purposes only.

Note: M.2 PCIe adapters require a PCIe x4 slot or higher for their working. They will not work with a PCIe x1 slot. Moreover, some older systems before 2015 may not support NVMe SSDs, so you should check your system compatibility with the NVMe drives. You may also want to install NVMe SSD drivers if you are using an older OS such as Windows 7.

Must Read: Fix NVMe SSD not Detected in BIOS or Windows

Below are the top M.2 PCIe Adapters that can be used with the PCI Express slot on your motherboard for running an NVMe or PCIe solid state drive.

Sabrent is quite a well-known company that is known for making NVMe solid state drives and computer accessories. Here we have NVMe M.2 SSD adapter from it that comes with a black painted aluminum heatsink, which helps in better heat dissipation and cooling down the SSD. The M.2 PCI-E adapter is quite sleek and supports PCIe x16/x8/x4 slots on the motherboard. It supports M.2 SSD sizes from 2230 to 2280 and is compatible with only M.2 M-Key PCIe SSD. The adapter even supports PCIe 4.0 SSD and can give you the full speed of a Gen4 SSD on a motherboard that supports PCIe 4.0 interface. It is a bracketless adapter and relies only on the PCIe slot for physical support. 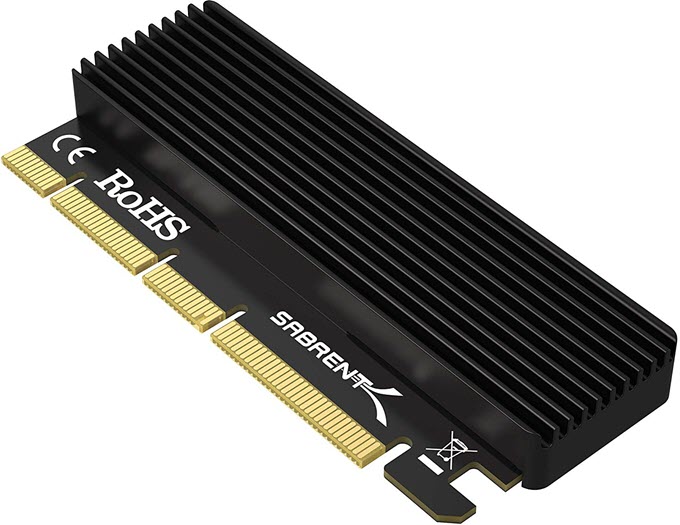 The adapter draws the power from the PCI-Express slot and does not require external power from the PSU. The M.2 SSD installation and heatsink installation is quite straightforward, and the package includes a screwdriver, thermal pad, and screws. It is one of the best M.2 NVMe PCI-E Adapters you can buy to install a fast NVMe PCIe SSD (even PCIe 4.0) in your PC.

Another very good single NVMe SSD adapter that supports M.2 M-Key SSDs up to 2280 form factor. It officially supports PCIe 3.0 motherboard and is backward compatible with PCIe 1.0 and PCIe 2.0. You can use this adapter in the PCIe x4/x8/x16 bus slots, and it includes both low-profile and full-profile brackets for use in almost all the PC cases. The M.2 PCIe Adapter offers good performance and can run an NVMe SSD to its full potential. It also has a built-in LED that indicates power status and data transfer status. The only thing that is a bit of a letdown is that it does not come with M.2 heatsink, and you have to buy it separately. The adapter is not compatible with B key M.2 PCIe SSDs and all M.2 SATA SSDs. 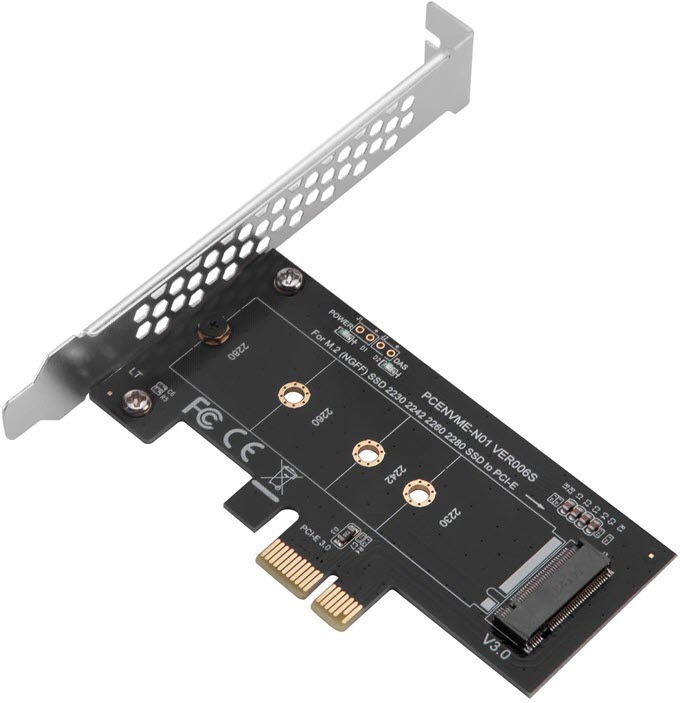 One of the most versatile M.2 PCIe adapters you can get for your PC because of its broad compatibility with different types of M Key PCIe SSDs. It supports a variety of M Key PCI Express drives that include NVMe and PCIe AHCI. Also, it supports long M.2 PCI-E drives up to 110mm (M.2 22110). The adapter is compatible with PCIe 3.0 motherboards and is also backward compatible with PCIe 2.0 and PCIe 1.0 standards. It comes with both low profile and full profile brackets to be used with almost all the PC cases. The M.2 PCIe adapter’s performance is very good, but the only thing that it lacks is an M.2 heatsink.

A cheaper alternative to the above mentioned Sabrent NVMe Adapter. It supports only M Key NVMe Solid Ste Drives and does not support PCI-e M Key AHCI SSD. When it comes to size, then it supports M.2 NVMe drives ranging from 2230 to 2280. The M.2 adapter comes with a black painted heatsink that reduces the temperature to quite a bit. The adapter performs as expected and can deliver the maximum speed supported by the NVMe drive in real-world situations. The maximum speed at which this adapter can run is PCIe 3.0 x4 and is also backward compatible with PCIe 2.0 and PCIe 1.0 interfaces. Thermal pads, a screwdriver, screws, and heatsink come bundled with the adapter. 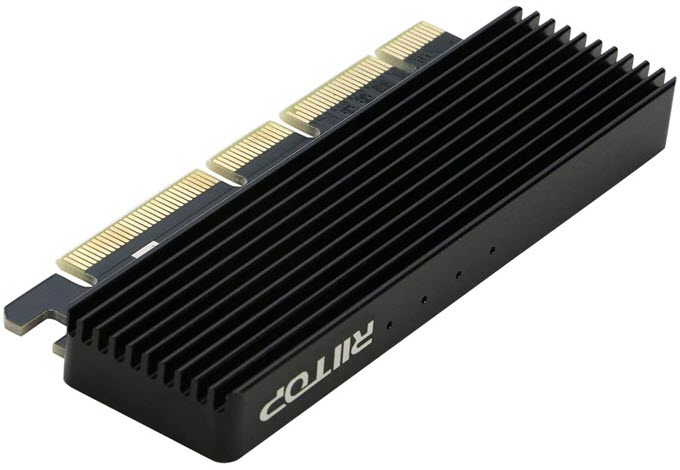 A very good budget M.2 PCIe Adapter that supports M-Key PCI-E NVMe and AHCI SSD up to M.2 2280 form factor. The M.2 PCI-E adapter comes with an aluminum heatsink that keeps the SSD cool and prevents it from overheating. It can support a dual-sided SSD module having a 1.5mm component height on the top and bottom side and is compatible with major operating systems that include Windows, Mac, and Linux. 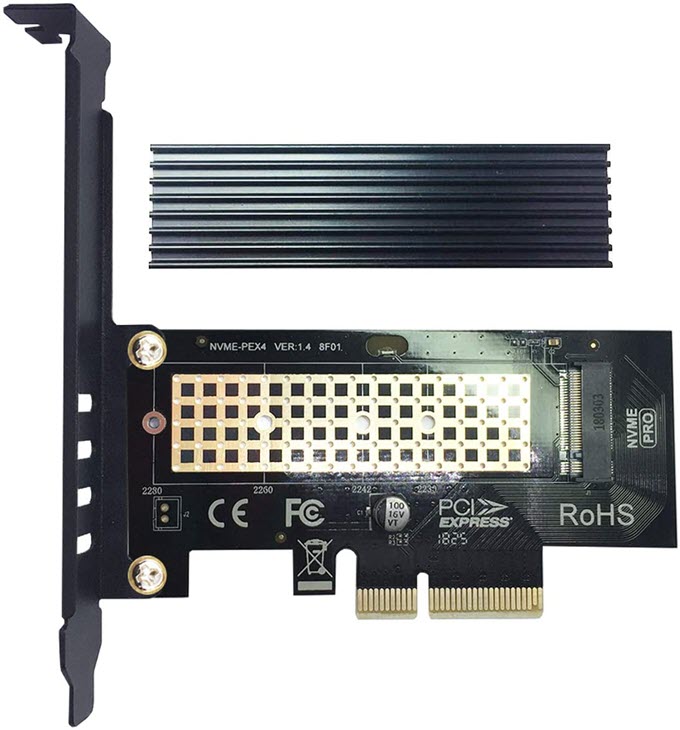 The adapter comes with thermal pads and offers two ways of fixing the M.2 SSD to the heatsink by rubber bands and metal clamps. The partial list of compatible SSDs with this adapter include Samsung 950 Pro/ 960 Evo/ PM951/ PM961/ SM951/ SM961/970 EVO /970 PRO and other M.2 SSDs with PCI-E (M-KEY) Interface Type and Intel Optane SSD 800P Series, Intel SSD 760p Series, Intel SSD 660p Series, Intel SSD 600p Series. The adapter provides PCI-E 3.0 X4 full speed support, and your SSD will run at its full rated speed. So, if you are looking for a low-price M.2 PCIe Adapter that offers wider M-Key SSD support and comes with a heatsink and other mounting accessories, then grab this one. The only con about this adapter is that you won’t use it in low-profile computer cases.

So, if your motherboard lacks an M.2 slot or if the M.2 slot does not support NVMe drive, then getting an M.2 PCIe adapter is the most affordable solution to use an NVMe SSD in your PC. These M.2 PCI-E adapters do not require external power and are plug and play if you are using the latest operating system or your OS supports NVMe drives natively. Also, the performance they offer is almost the same as an integrated M.2 slot on a motherboard. If you have some queries about the M.2 PCIe adapter compatibility, then you can ask them in the comment box below. 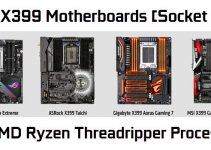 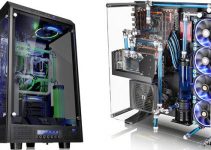 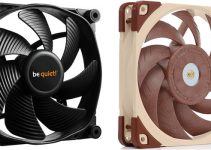