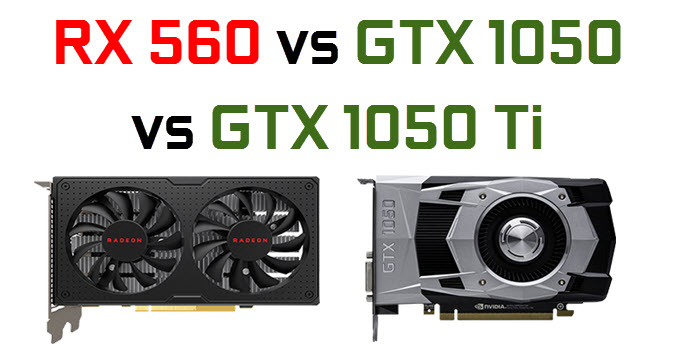 Here is a detailed comparison of Radeon RX 560, GeForce GTX 1050, and GeForce GTX 1050 Ti graphics cards based on their specifications, features, performance, and power consumption.

Check out: HBM vs GDDR5 vs HBM2 vs GDDR5X Comparison

All these three mid-range graphics cards support DirectX 12, OpenGL 4.5 and Vulkan APIs. When it comes to screen tearing preventive technology in games then Radeon RX 560 has FreeSync while GTX 1050 and GTX 1050 Ti has got G-Sync.

Radeon RX 560 does support CrossFire multi-GPU setup while GTX 1050 and GTX 1050 Ti do not support multi-GPU configurations. Also all these GPUs are available for both laptops and desktops.

Check out: Best FreeSync and G-Sync Monitor for Gaming

All these three mid-range graphics cards are great for 1080p gaming and are very affordable. If I have to pick the graphics card that offers great value for money then I would go with Radeon RX 560 because of its higher performance and 4GB memory over the GTX 1050. For pure performance, GTX 1050 Ti is the best card out here and it also consumes less power beating Radeon RX 560, which is slower than it.