Radeon RX 7900 XTX is powered by RDNA 3 GPU architecture and uses the Navi 31 XTX GPU. It is the first gaming graphics card to use a chiplet GPU design where multiple chiplet or dies reside on the same package. RX 7900 XTX GPU consists of a GCD (Graphics Compute Die) and six MCDs (Memory Cache Dies). The GCD sits at the center and consists of compute units whereas MCDs surround the GCD and consist of a memory controller and cache. The GCD is built on the smaller 5nm fabrication process while MCDs are built on the 6nm fabrication process. RX 7900 XTX comes with 6144 Stream Processors and 96 Ray Accelerators or RT Cores. The card has got 24 GB GDDR6 memory with a 384-bit interface and the memory runs at a speed of 20 Gbps. The effective memory bandwidth delivered is 960 GB/s but the card can achieve a peak memory bandwidth of up to 3500 GB/s using 96 MB Infinity Cache, an ultra-fast cache memory present on the GPU die. The card supports DirectX 12 Ultimate, OpenGL 4.6, Vulkan, PCI-Express 4.0, Real-Time Ray Tracing, HDMI 2.1, AV1 Encode/Decode, Resizable BAR, HDMI 2.1, DisplayPort 2.1, FidelityFX Super Resolution (FSR 3.0) and USB Type-C (DisplayPort 2.1 passthrough + PD) for connecting next-generation VR headsets. Besides the reference RX 7900 XTX model, there are other models available too from different AIB manufacturers. So, to help you choose the right RX 7900 XTX card for your specific requirements or needs, below I am listing down the best RX 7900 XTX cards based on important parameters.

Sapphire NITRO+ AMD Radeon RX 7900 XTX is one of the best RX 7900 XTX cards and it comes with the highest factory overclocking of all custom RX 7900 XTX cards. It is also one of the best-looking RX 7900 XTX cards featuring a completely new design. The card has got GPU Boost Clock of 2680 MHz which is 180 MHz more than the reference boost clock of 2500 MHz. For cooling, the card uses a large aluminum heatsink with a copper vapor-chamber baseplate for GPU and Memory chips, and seven copper heatpipes that take heat away from the vapor chamber to the heatsink fins. The heatsink is cooled by three dual ball bearing fans that feature an angular velocity blade design for providing more downward air pressure and more airflow for better cooling performance. These are quick-connect fans and can be removed and replaced easily without opening up or dismantling the whole card. The graphics card runs very silent and uses passive cooling technology for completely silent operation during low GPU loads. The card runs quite cool even with such a high amount of factory overclocking. It also comes with dual BIOS and you can switch between the BIOSes either by using the physical switch present on the GPU or by using Sapphire TriXX software. 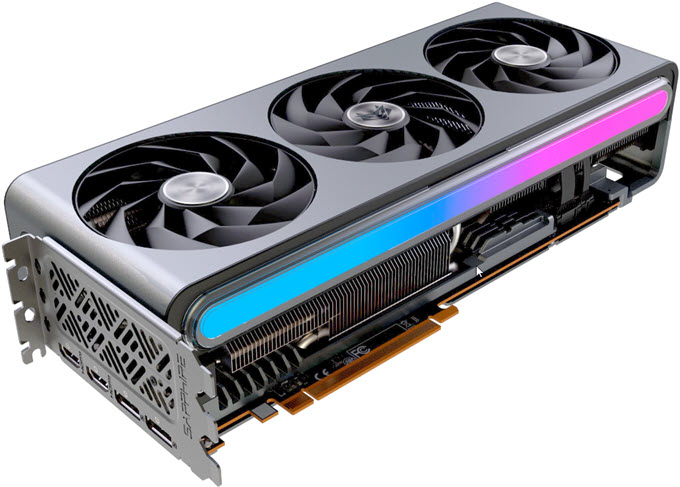 The card is 320mm in length and has got 3.5-Slot design. It is a strongly built card and has got a metal frame, metal GPU bracket, and an aluminum backplate that not only provides rigidity but also aids in cooling. A graphics card supporter comes bundled with the card to prevent GPU sag. The card also features beautiful ARGB lighting where two RGB lightbars are present on the top and bottom of the card, and on the backplate, there is a Sapphire RGB logo. The RGB lighting, tweaking important parameters, and advanced features can be controlled, customized, and monitored by using the Sapphire TriXX tweaking software. For power, the card requires three 8-pin PCIe connectors and a minimum of 800W PSU is recommended by the manufacturer. The total board power for the card is 420W at the maximum power limit. Display connectivity options include two HDMI 2.1 ports and two DisplayPort 2.1 ports.

ASUS TUF Gaming Radeon RX 7900 XTX OC Edition is possibly the best RX 7900 XTX card you can buy for a high-end gaming PC for 4K gaming. It is because the card excels in every department that includes build quality, performance, looks, noise, temperature, and features. It is an overclocked edition card and has a GPU Boost Clock of 2615 MHz in OC mode. For cooling, the card uses a massive aluminum heatsink with a large copper baseplate and seven copper heatpipes. The heatsink is cooled by three Axial-tech fans that come with dual ball bearings for a longer lifespan. The fans at the sides spin in the opposite direction of the middle fan to minimize air turbulence and maximize air dispersion through the heatsink. The fans are very quiet in operation even under full load. The semi-passive cooling technology ensures super-silent operation at low GPU loads. It stops the fans from spinning when the GPU temperature gets below 55 degrees Celsius and starts them again when the GPU temperature crosses 60 degrees Celcius. The card also comes with Dual BIOS and you can switch between the Performance (P) and Quiet (Q) BIOS using a physical switch located on the side of the card. In Quiet BIOS the card runs super quiet but with a slightly higher temperature. 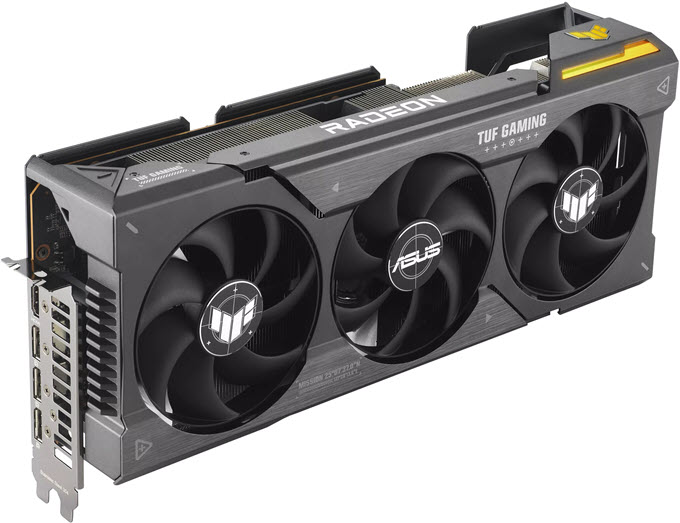 The card is 353mm long and has got 3.63-slot design. A metal backplate, diecast frame, and an aluminum shroud give the card rigidity and strength. The metal backplate is vented and quite thick, and it also helps in cooling down some of the components located at the backside of the card. A graphics card holder also comes bundled with the card to prevent sagging the under its weight. The card also features ARGB LED lighting and supports Asus Aura Sync. Using the ASUS GPU Tweak III, you can tweak and monitor the important parameters of the card including syncing or setting up custom ARGB lighting.  The card requires two 8-pin PCIe connectors for power and an 850W PSU is recommended by the manufacturer. The card supports four display outputs and connectivity options include two HDMI 2.1 ports and two DisplayPort 2.1 ports.

If you are looking for a compact RX 7900 XTX then you should go for the reference RX 7900 XTX model. The card is relatively compact compared to custom RX 7900 XTX models and RTX 4080. The reference RX 7900 XTX has a length of 287mm and uses a 2.5-slot design. It can quite easily fit in most of the modern-day mini-ITX and smaller PC cases. For cooling, the card uses a large vapor chamber that has aluminum fins attached to it directly. There are no copper heatpipes used in this cooling design. The heatsink is cooled by three fans that are silent at low loads but can get somewhat noisy at higher GPU loads. However, they do a great job of keeping the temperature in check as the card runs very cool even at high GPU loads. The card does come with semi-passive cooling technology and has got a thick metal backplate that protects the card against damage during handling. 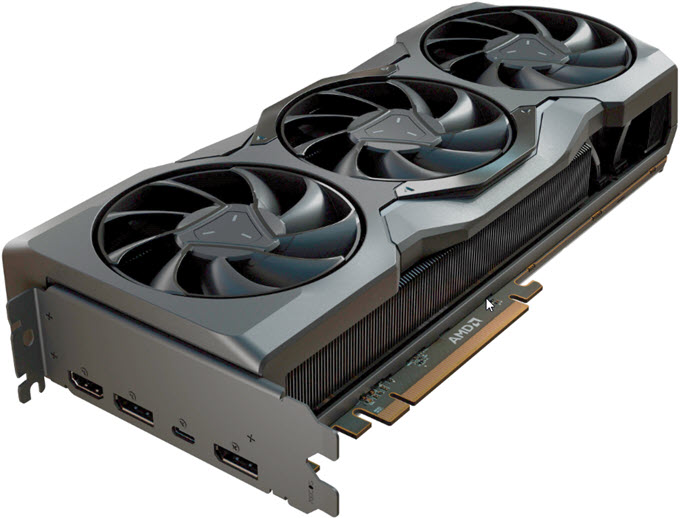 As this is a reference design, it comes with stock GPU frequencies only. The card has got a GPU Boost Clock of 2500 MHz which is the stock frequency for RX 7900 XTX. Coming to aesthetics, the card looks great and has a black and gray color scheme. For power, the card requires two 8-pin PCIe power connectors and an 800 Watt Power Supply. Display connectivity options include one HDMI 2.1 port, two Display 2.1 ports, and a USB Type-C port. The USB Type-C port is a DisplayPort 2.1 passthrough with power delivery (PD) for hooking up next-generation VR headsets.

Some other good custom RX 7900 XTX models that are worth checking out:

If you have any queries or are still unable to select the right RX 7900 XTX card for your PC then let me know your queries in the comment box below. 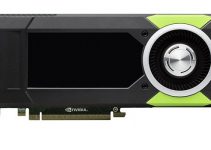