RTX 4070 Ti is the new heavy-weight entry in the Nvidia GeForce RTX 40 series graphics card lineup. The card sits below the RTX 4080 in the GeForce RTX 40 series and is targeted for super-fast 1440p and comfortable 4K gaming. The card comes with all the features that are present in its bigger brothers that include RTX 4080 and RTX 4090. The main competitor of the GeForce RTX 4070 Ti is the Radeon RX 7900 XT from AMD. Also, the card is being compared to the RTX 3090 Ti which was the previous generation flagship card Nvidia. So, if you want to know how these three cards compete against each other in various departments then here in this post, I will compare them on various important parameters. 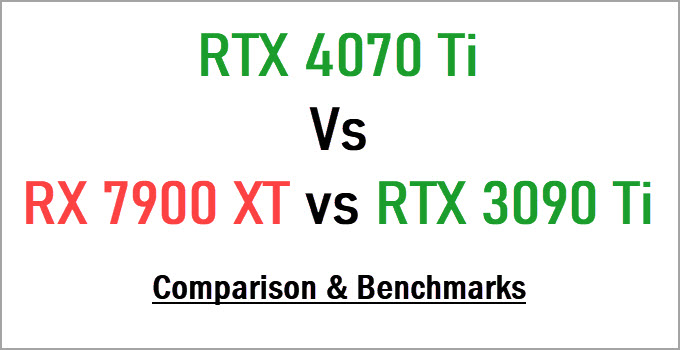 Below is the comparison between RTX 4070 Ti, RX 7900 XT, and RTX 3090 Ti graphics cards based on their specifications, performance, pricing, power consumption, and features.

Radeon RX 7900 XT from AMD is built on the RDNA 3 GPU architecture and uses Chiplet GPU design where it consists of a bigger Graphics Core Die (GCD) at the center and smaller Memory Cache Dies (MCD) around it on the same package. The GCD is built on a smaller 5nm fabrication process while MCDs are built on a 6nm fabrication process. RX 7900 XT uses Navi 31 XT GPU chip and comes with 5376 Stream Processors and 84 RT Cores or Ray Accelerators. It must be noted that you cannot compare CUDA Cores and Stream Processors just on their count as they are structurally and functionally different and belongs to different technologies and GPU architectures.

RTX 4070 Ti has the lowest amount of video memory available compared to its competitors. Moreover, its memory bus width and memory bandwidth are significantly lower compared to the competition here. The card comes with 12 GB GDDR6X memory with a 192-bit memory interface. The memory runs at a speed of 21 Gbps and delivers a bandwidth of 504 GB/s. On the other hand, Radeon RX 7900 XT comes with 20 GB GDDR6 memory with a 320-bit interface. Its memory runs at a speed of 20 Gbps delivering a bandwidth of 800 GB/s. The RX 7900 XT also comes with an 80 MB ultra-fast memory cache called Infinity Cache and can achieve a much higher peak memory bandwidth of up to 2900 GB/s. Here, the card with the highest and fastest memory is the RTX 3090 Ti. It comes with 24 GB GDDR6X memory that has a bus width of 384-bit. The memory runs at 21 Gbps speed and generates a bandwidth of 1008 GB/s.

Here are the gaming benchmarks of these cards at 1440p and 4K resolution in the latest AAA games. 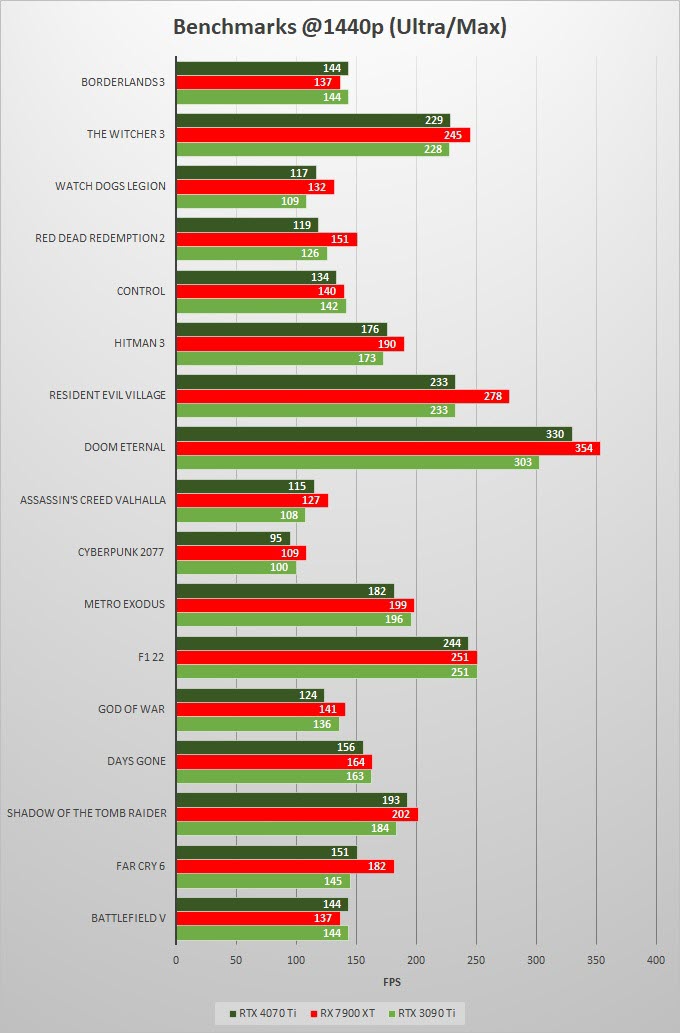 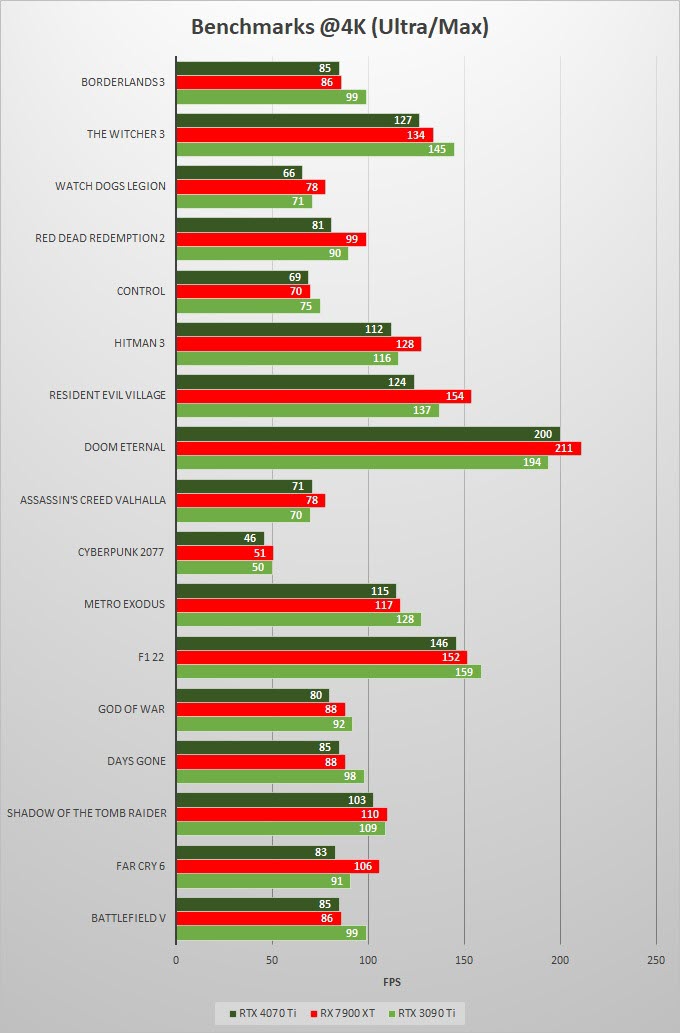 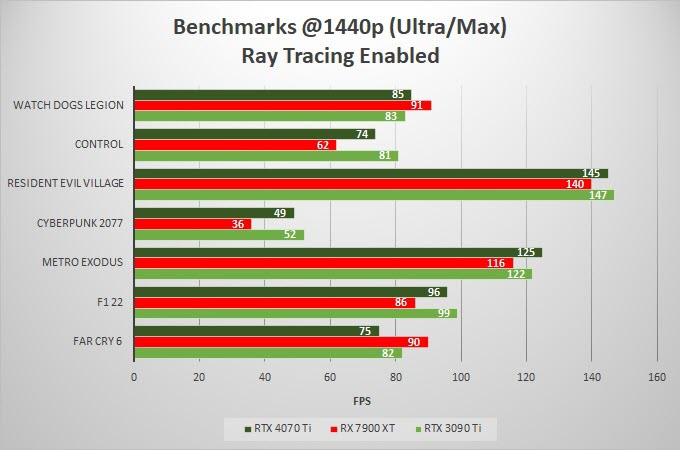 From the above gaming benchmarks, we see that at 1440p resolution, all three cards perform almost the same with RX 7900 XT slightly faster than the other two. However, at 4K, both RTX 7900 XT and RTX 3090 Ti take a significant lead and are about 10% faster (on average) than RTX 4070 Ti. When Ray Tracing is turned ON in supported games at 1440p then RX 7900 XT does lag behind slightly in most games.

RTX 4070 Ti is the most affordable card here with a base MSRP of USD 799 while RTX 3090 Ti is the most expensive card in this comparison having an MSRP of 1999 US Dollars at the time of launch. RX 7900 XT is slightly more expensive than RTX 4070 Ti with an MSRP of 899 US Dollars. The custom models of these cards from different AIB partners do cost more and also the price fluctuates with time. So, to know the actual pricing of these cards, you can go through the links given below.

Well, RTX 4070 Ti may not have that wow factor associated with but it is a very good product. It performs almost the same as RTX 3090 Ti while being almost twice as energy efficient. It is also quite moderately priced and is cheaper than the RX 7900 XT and RTX 3090 Ti. For now, 12GB VRAM is sufficient for 1440p and 4K gaming, it is significantly lower than RX 7900 XT, RX 7900 XTX, and RTX 3090 Ti. In the end, I would only like to say that if you can find an RTX 4070 Ti model close to the base MSRP then I think it is worth a shot. 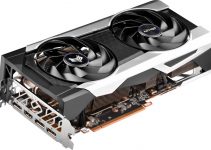 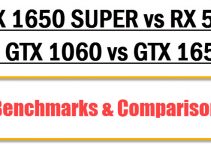