If you are looking for a fast graphics card for AAA 1080p gaming then Radeon RX 6650 XT is one of the better options to consider. Technically speaking, RX 6650 XT is not an entirely new graphics card but a refresh of RX 6600 XT. In simpler words, RX 6650 XT is an overclocked RX 6600 XT and comes with higher GPU Boost frequency and Memory frequency while other specifications remain the same. Besides an increase in performance, the higher GPU and memory speed also results in a slight increase in power consumption but it is not an issue to worry about. RX 6650 XT competes with GeForce RTX 3060 from Nvidia and beats it gracefully in almost all the major AAA games. On average, RX 6650 XT is around 13% faster than RTX 3060 and around 5% faster than RX 6600 XT.

Radeon RX 6650 XT is powered by the RDNA 2 GPU architecture and is built on a smaller 7nm fabrication process. The card uses Navi 23 XT and has 2048 Stream Processors and 32 Ray Accelerators. The card comes with 8GB GDDR6 memory that has a bus width of 128-bit and runs at 16 Gbps, offering an effective memory bandwidth of 256 GB/s. However, the card can achieve a much higher peak memory bandwidth by using the 32MB Infinity Cache, an ultra-fast cache present on the GPU. The card supports PCI Express 4.0 interface but the bandwidth is limited to x8 lanes only which can become an issue for users with PCIe 3.0 motherboards because they can encounter performance loss in some of the latest AAA games. Other features include DirectX 12 Ultimate, OpenGL 4.6, and Vulkan, Real-Time Ray Tracing, HDMI 2.1, AV1 decode, Resizable BAR, AMD FidelityFX Super Resolution (FSR), Microsoft DirectStorage API (to reduce game loading times), variable refresh rate technology FreeSync to reduce game stuttering. There are quite a few RX 6650 XT models available from various AIB manufacturers and choosing between them can become confusing for some. So, to help you pick the right RX 6600 XT model, I will be listing the best RX 6600 XT cards based on different parameters that include overclocking, form factor, thermal performance, noise, etc.

Probably the best overall RX 6650 XT card you can get for your gaming system. The card offers great performance, offers numerous features, looks stylish, and runs cool and quiet. The card is also on the compact side as it is 260mm in length. However, the height of the card is on the higher side as it is a 2.5-slot card and will consume three expansion slots in your PC case. Sapphire NITRO+ AMD Radeon RX 6650 XT is one of the most overclocked RX 6650 XT cards and comes with a GPU Boost clock of 2694 MHz. For cooling, the card uses a beefy aluminum heatsink with four copper heatpipes and a pair of 100mm fans. The fans come with dual ball bearings for a longer lifespan and feature an Angular Velocity Fan Blade that provides a double layer of downward air pressure which alongside the air pressure on the outer ring of the Axial fan resulting in up to 44% more downward air pressure and up to 19% more airflow for a quieter and cooler operation. Also, the fans on this card are quick-connect fans that use a special proprietary connector and can be removed easily for cleaning or replacement without dismantling the card or removing the shroud. The card comes with a stylish metal backplate that not only protects the card or provides it rigidity but also helps in cooling as it has thermal pads attached on the inside for dissipating the heat from the PCB. 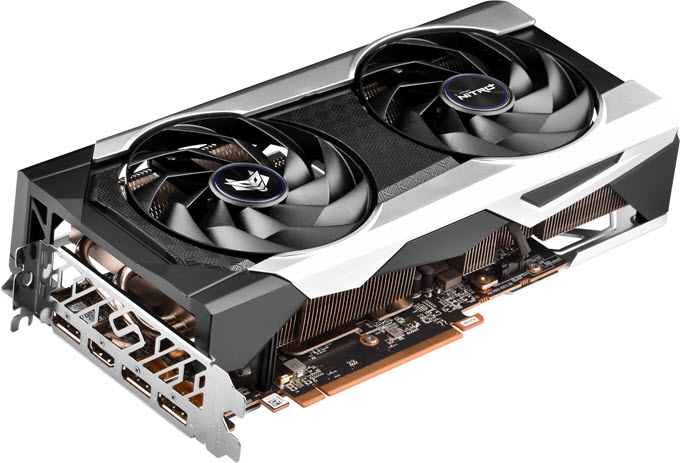 The card comes with Dual BIOS and you can switch between the default Performance BIOS or Silent BIOS by using the physical BIOS switch or using the TriXX software. The Sapphire TriXX software can be used for overclocking the card, tweaking various advanced parameters of the card, or monitoring the card’s parameters in real-time. The card uses RGB lighting and an ARGB header is also present to sync the RGB lighting with other compatible devices. For power, the card requires a single 8-pin PCIe connector and a 500W PSU is recommended for it by the manufacturer. Display connectivity options include three DisplayPort 1.4 ports and one HDMI 2.1 port.

PowerColor Fighter AMD Radeon RX 6650 XT is the most compact RX 6650 XT card that you can get for your small form factor system or PC Case. It is a dual-slot card and is only 200mm in length. Also, it is one of the most affordable RX 6650 XT cards that you can get at close to the base MSRP or even at the base MSRP if you are lucky. The cooling system of the card comprises a vertical fin array aluminum heatsink having three direct-touch copper heatpipes that make direct contact with the GPU for better heat dissipation. The heatsink is cooled by two 90mm dual ball-bearing fans that are pretty silent in operation. Moreover, the Mute Fan Technology on the card provides semi-passive cooling where it turns off the fan below 60°C, providing silent gaming during medium and low load while reducing power consumption. The fans start automatically whenever the GPU temperature crosses 60°C for keeping the card cool during high GPU loads. The card requires one 8-Pin PCI Express Power Connector and display connectivity options include three DisplayPort 1.4 ports and one HDMI 2.1 port. 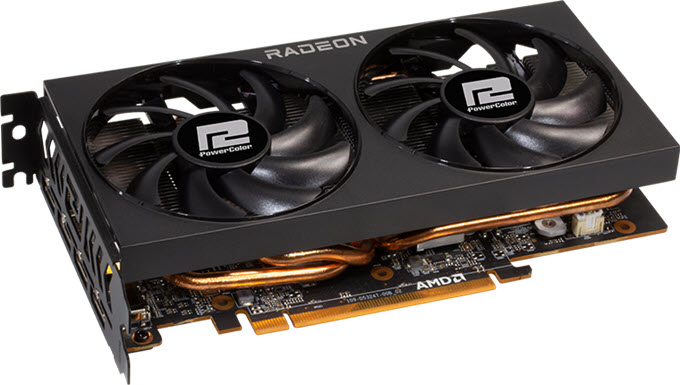 If you are looking for a triple-fan RX 6650 XT card then XFX Speedster MERC 308 AMD Radeon RX 6650 XT is the one to get. Well, looks can be subjective but the majority of the people will agree with me that it is the best-looking RX 6650 XT card. When it comes to dimension then the card is 274mm long and has a 2.5-slot design. The card is a piece of art as it looks breathtaking with its textured black shroud with silver borders and silver fan inserts and has a stylish vented backplate. The XFX’s all-new Ghost Thermal design consists of an aluminum heatsink with four 6mm nickel-plated copper heatpipes and triple fans having 9 blade design for quieter operation. The Zero DB fan system provides semi-passive cooling functionality where fans get turned off when GPU load and temperature are low to ensure completely silent operation and they start automatically when the GPU temperature crosses a certain threshold value. The card also comes with Dual BIOS but you should note that both BIOS are identical and the extra BIOS is provided for backup use only in case of failed BIOS update. There is a LED-lit logo with the name of the card that can be seen on the side of the card. For power, the card requires a single 8-pin PCIe connector and the manufacturer recommends a 500 Watt PSU. The display output options consist of an HDMI 2.1 port and three DisplayPort 1.4 ports.

If you need help in selecting the best RX 6650 XT model for your specific requirements then you can ask me your queries in the comment section below by clearly stating your requirements and system specifications. 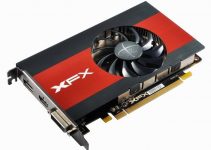