AMD Radeon RX 6500 XT is the world’s first 6 Nanometer (nm) GPU. It is also the smallest graphics card in the AMD Radeon RX 6000 graphics card lineup and sits below Radeon RX 6600 in the series. The card is mainly targeted towards eSports and 1080p gaming and has lower power consumption. It is also a relatively smaller card and is well suited for small form factor (SFF) cases. The main competitors of RX 6500 XT are GeForce GTX 1650 SUPER from Nvidia and Radeon RX 5500 XT which the RX 6500 XT officially replaces. Here in this post, I am going to compare the RX 6500 XT against its major rivals so that you can know about its performance, features and whether you should prefer it over its competitors or not. 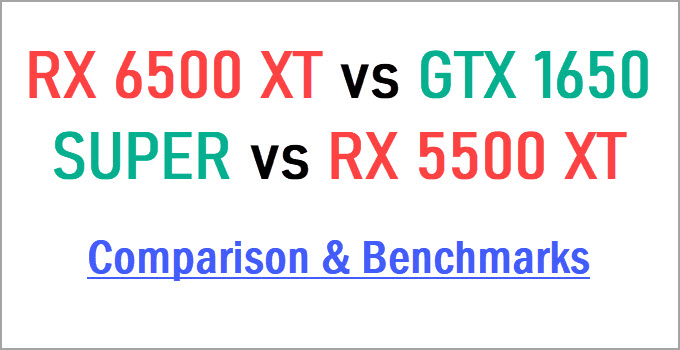 Below is the comparison between RX 6500 XT, GTX 1650 SUPER, and RX 5500 XT graphics cards based on their specifications, performance, pricing, power consumption, and features.

Radeon RX 6500 XT is the first graphics card in the world that is built on the 6nm manufacturing process. The card is powered by RDNA 2 GPU architecture and uses Navi 24 GPU. It comes with 1024 Stream Processors and 16 Ray Accelerators or RT Cores for Real-Time Ray Tracing. On the other hand, Radeon RX 5500 XT is built on a relatively older platform which is RDNA architecture. It uses Navi 14 GPU built on a 7nm fabrication process and comes with 1408 Stream Processors.

GeForce GTX 1650 SUPER is an Nvidia card and uses a completely different GPU architecture which is Turing. It uses TU116 GPU architecture on the 12nm manufacturing process and comes with 1280 CUDA Cores. The card does not have any RT Cores or Turing Cores. There is no way to compare Stream processors with CUDA Cores directly and you can learn how they are different from each other by going through the link given below.

When it comes to features then RX 6500 XT has the least of the three because the Navi 24 GPU was originally intended for use in laptops mainly in the budget segment. It lacks hardware encoding and there is no support for 4K H264 Encode, H265/HEVC Encode, and even AV1 Decode. This is quite surprising because even the much older cards like RX 570, RX 580, and RX 590 have those features present in them. Also, RX 6500 XT offers only two display/video outputs which can be an issue for some of the users. The only thing that RX 6500 XT has over its competitors is the Real-Time Ray Tracing support which I think is quite meaningless for a budget category card because of their lower performance. RX 5500 XT supports PCIe 4.0 but the bandwidth is limited to only 4 lanes (x4).

As these cards are meant for 1080p gaming only so here are the benchmarks of these cards at 1080p resolution in the latest AAA games. 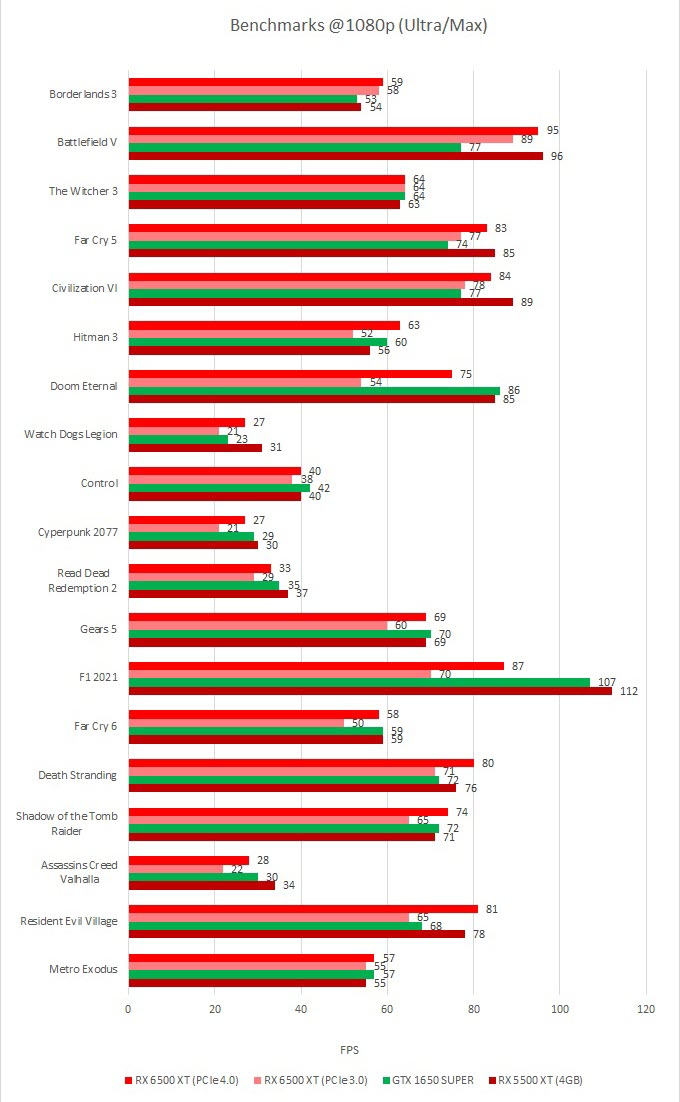 From the above benchmarks, you can see that RX 6500 XT does beat GTX 1650 SUPER and RX 5500 XT in some games but is beaten by both in the majority of the games when the PCIe interface is dropped to PCIe 3.0 for the RX 5500 XT. Moreover, the difference in the performance between PCIe 4.0 and PCIe 3.0 for RX 5500 XT is quite significant because the card’s PCIe bandwidth is limited to x4 only no matter what the PCIe interface is i.e. PCIe 4.0, PCIe 3.0, or PCIe 2.0.

I think RX 6500 XT is one of the worst graphics cards in the recent launches because it lacks performance and features for the price it sells. For the given price there are much better alternatives available in the market that include GTX 1650 SUPER, RX 5500 XT and even used RX 590, or RX 580. The card is crippled by its PCI Express bandwidth, lower memory bandwidth, and suffers a huge performance loss on PCIe 3.0 interface. I don’t think anyone spending money on a PCIe 4.0 motherboard and processor is going to buy a budget card like RX 6500 XT and the majority of the users for this card would be having PCIe 3.0 motherboard only. I think RX 6500 XT is a complete failure of a graphics card from AMD and there is no place for this card in the market because better alternatives are available with more capability and features at the same or lesser price. If you have opinions or queries then let me know in the comment section below.