The 1080p gaming graphics cards segment has become more competitive and crowded with the launch of the Radeon RX 5500 XT. The card faces stiff competition from the GeForce GTX 1650 SUPER, Radeon RX 580, RX 590, and even from the GTX 1660 which is kinda one segment above it. It has now become very difficult to choose between these 1080p gaming cards as all of them deliver almost similar kind of performance and also the pricing of some of these cards is close to each other. RX 5500 XT, GTX 1650 SUPER, and GTX 1660 are newer cards while the RX 580 and RX 590 are older players but still give these newer cards a run for their money and are still a compelling buy. So, if you are confused about which card is best for your gaming and other needs, then here I am going to compare them on the basis of various important parameters, which can help you make the right decision. 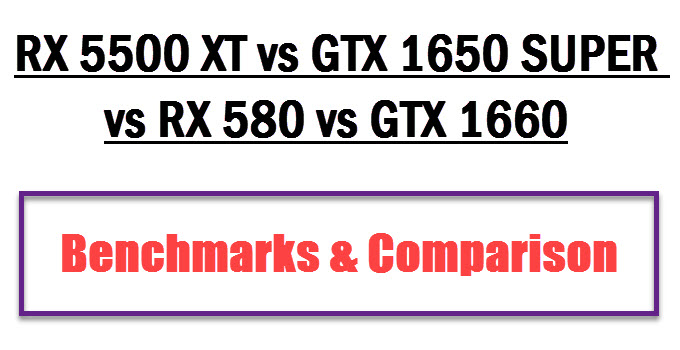 Here is the comparison between these cards based on their specifications, performance, features, power consumption and pricing.

Radeon RX 5500 XT is the only card here that is built on the smaller 7nm manufacturing process. It is powered by RDNA GPU architecture and the GPU chip used is the Navi 14. The card comes with 1408 Stream Processors and 22 Compute Units (CU). GTX 1660 and GTX 1650 SUPER are GTX 16 series graphics cards that are built on the Turing GPU architecture on the 12nm manufacturing process and use the TU116 GPU chip. They come with 1408 and 1280 CUDA Cores respectively. The oldest card here is the Radeon RX 580 which is built on the Polaris GPU architecture on a 14nm process and comes with 2304 Stream Processors. RX 580 does contain significantly more stream processors than the RX 5500 XT but due to differences in GPU architecture, they cannot be compared neck and neck in terms of streaming processors numbers only.

All these graphics cards support the latest APIs that include DirectX 12, OpenGL 4.6, and Vulkan. Also, all of them support G-Sync / FreeSync  (AMD) which is used to prevent screen tearing in games by dynamically changing the refresh rate of the monitor to the frame rate for a smooth and stutter free gameplay. Here, RX 5500 XT is the only card to support the latest PCIe 4.0 interface (x8), while others support PCIe 3.0 (x16). All of these cards support 4K H264 & H265/HEVC encoding and decoding. GTX 1650 and GTX 1660 SUPER share the same Turing Encoder (NVENC) which is better than the one in the AMD cards and supports HEVC 8K encoding at 30FPS.

Here are some gaming benchmarks of these graphics cards in popular AAA games at ultra/high graphics settings at 1080p resolution. 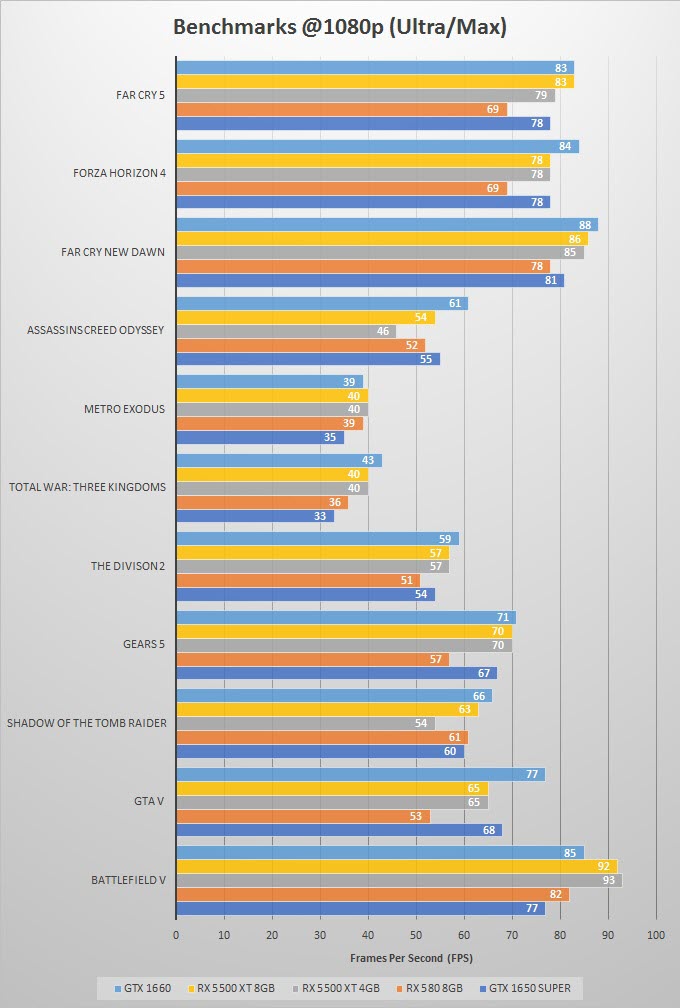 From the above benchmarks, you can clearly notice that the fastest card here is the GTX 1660, which is then closely followed by RX 5500 XT 8GB. The 4GB RX 5500 XT performs similar to the 8GB variant in most of the games and it only lags behind in some AAA games that require more VRAM for even 1080p resolution. RX 580 also matches the RX 5500 XT performance in some games while in others it remains a little behind. The GTX 1650 SUPER performs a bit better than the RX 580 and in some games, it even beats the more expensive RX 5500 XT.

In the pricing department too, GTX 1650 SUPER leads with a base MSRP of $160 only. At the base MSRP of $199, you can get GTX 1660 SUPER and the 8GB variant of RX 5500 XT, while the 4GB RX 5500 XT is priced at $169. The MSRP of the Radeon RX 580 was $229 at the time of launch but now the 8GB model can be had at around the $180 mark. You can check the current prices of these cards from various AIB partners from the links below because custom models with better coolers and extra features do cost more.

Quite frankly, it is very hard to pick between these cards because most of them are neck and neck in the performance department, and the major factor that comes into play is the price. There is no doubt that the best value card here is the GTX 1650 SUPER because of its attractive pricing and it does not lose out on a performance by much. It can play almost all the modern-day AAA titles on very high/high settings at 1080p comfortably with 60FPS on average. RX 580 is the oldest card here but can still match the performance of the newer cards and can be had at a pretty good discount. However, the major downside of this card is its relatively higher power consumption which may scare some of the users away.

Radeon RX 5500 XT does not excite much because it is priced much higher than the competition and it does not even beat the GTX 1660, which you can have at a similar price point. The RX 5500 XT would have been a great buy if the 8GB variant was priced at which 4GB costs and 4GB were 30 bucks cheaper than its original price. However, we may expect to see a drop in the prices of RX 5500 XT in the near future as it eventually going to replace the RX 580 and RX 590, but for now, it does not offer much rather than just extra video memory. If you have any queries, then feel free to ask in the comment section below. 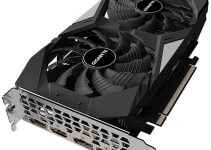 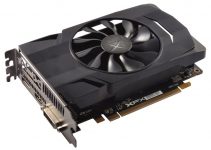