GeForce GTX 1080 is one of the fastest graphics cards available today. It is a high-end graphics card from Nvidia that is built on the Pascal GPU architecture. It comes with 2560 CUDA Cores and 8GB GDDR5X memory having 256-bit interface. GDDR5X memory is faster and more power efficient than the normal GDDR5 memory which is used in most of the graphics cards whether budget, mid-range or high-end graphics cards. With GeForce GTX 1080 you can play latest games on Ultra / Highest graphics settings at 1440p and 4K resolution. On 4K resolution, you might have to lower down or turn down some of the in-game graphics settings depending on the game.

GeForce GTX 1080 is a VR ready card and it supports SLI (multi-GPU setup), DirectX 12, OpenGL 4.5, Vulkan, Nvidia Ansel, G-Sync (for smooth gameplay), Nvidia GPU Boost. The card has maximum power consumption of 180W and it requires a 500 Watt PSU for its working. The main competitor of GeForce GTX 1080 is Radeon RX Vega 64 graphics card from AMD which is built on the Vega GPU architecture. You can find GeForce GTX 1080 from different brands in many variants/models and it might become very confusing for the users on which GTX 1080 card to get. So here in this post, I am going to list down the best GTX 1080 graphics cards for your specific needs or requirements.

Must Read: Best Graphics Cards under 500 dollars for 1440p Gaming

This is the best value GTX 1080 that you can get for your high-end gaming PC. Gigabyte GeForce GTX 1080 G1 Gaming 8G comes with WINDFORCE 3X cooling system with triple fans that keep the card’s temperatures well under control. Also, the heat sink consists of copper heat pipes to allow better dissipation of heat from graphics card components. On the back, there is a metal backplate that provides extra strength and rigidity to the card. 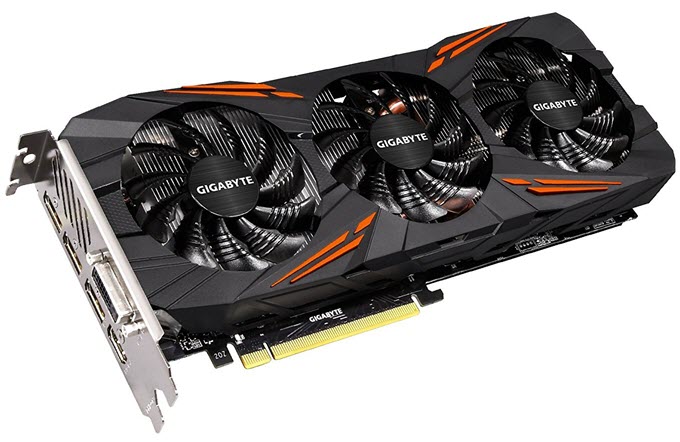 This is an overclocked GTX 1080 which means you will get better performance than the reference GTX 1080. This VR ready card comes with custom RGB LED lighting and Smart Power LED indicators. The card requires one 8-pin PCI-E power connector and 500W PSU for its working. Another GTX 1080 card that offers the best value for your money is EVGA GeForce GTX 1080 SC GAMING.

If you are looking for the fastest and most overclocked GeForce GTX 1080 card on air cooling then ASUS ROG Strix GeForce GTX 1080 OC edition is the one that you should get. This is really a monstrous card and for cooling, it comes with triple fans and heat sink with heat pipes. This is Asus’ STRIX card which means the fans completely shut off during low temperatures making the card super silent in operation. They kick back in again when the temperature of the card rises especially during intensive gaming. 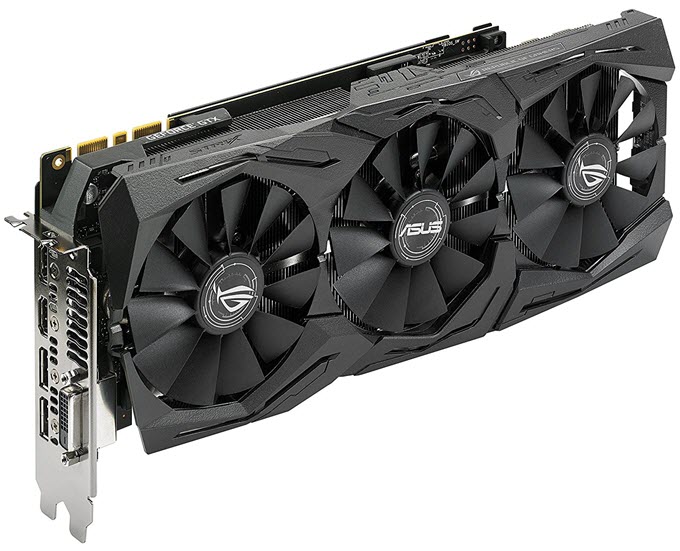 The card comes with Aura Sync LED lighting and VR friendly HDMI ports. The power consumption of this GTX 1080 card is a bit on the higher side as it requires both 6-pin and 8-pin PCI-Express power connectors from the PSU. You can also check out the normal edition (non-OC) of this card from below which is a bit cheaper in price.

Best GTX 1080 with for Overclocking & Cooling

For overclocking purposes, you will need a graphics card with better cooling and more power phases for So here we have EVGA GeForce GTX 1080 FTW GAMING Hybrid which is a liquid/water-cooled GTX 1080 card and it comes with 10+2 power phases for maximum stability during overclocking. Due to water cooling the card is also very silent in operation. Also, the card comes pre-overclocked but you can overclock it more using EVGA Precision X overclocking software. 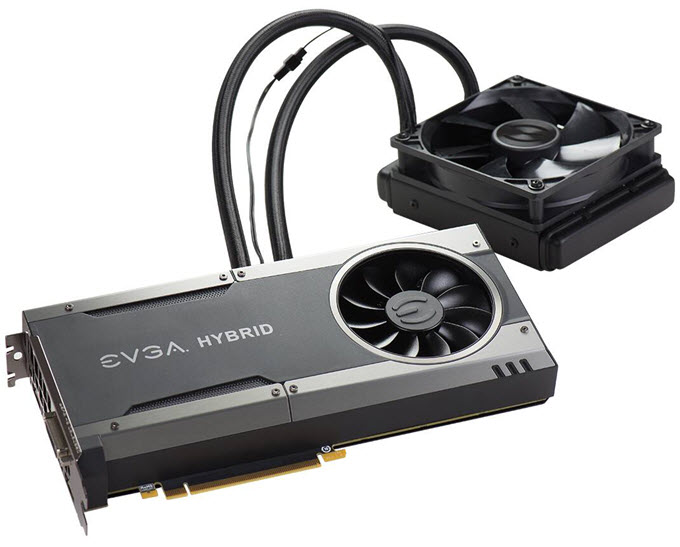 The card comes with RGB LED and a metal backplate. This card has higher power consumption than other GTX 1080 cards and it requires two 8-pin PCIe power connectors and 550W – 600W power supply for its working. You can also check out the air cooled GTX 1080 from EVGA with 10+2 power phases from the link below.

Here we have a silent and good looking GTX 1080 card which is MSI GeForce GTX 1080 GAMING X 8G. This overclocked GTX 1080 card from MSI comes with TWIN FROZR VI cooling system with dual TORX 2.0 fans. Below 60° C both the fans stop completely thereby making the card completely silent in operation. They do get started above 60° C but they remain very quiet and almost unhearable from the outside. 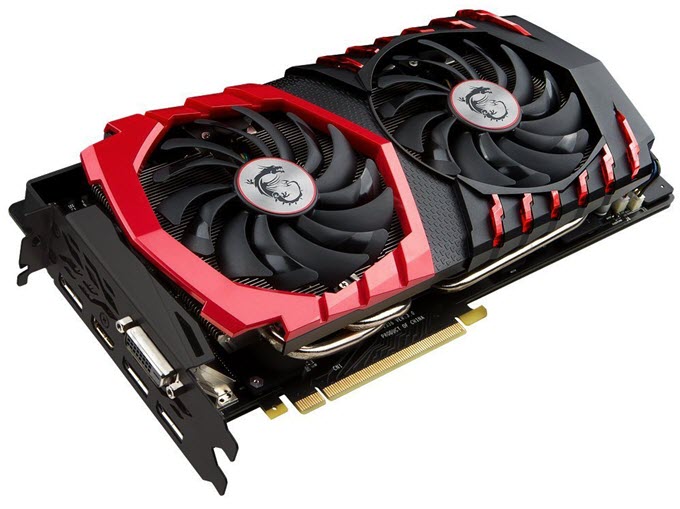 The card comes with VR support and cool RGB LED lighting. You can customize the various functions of the card using MSI Afterburner overclocking software. The card requires one 6-pin and 8-pin PCIe power connector from the PSU. Overall a great GTX 1080 card that packs performance, features and remains very quiet even during gaming. Highly recommended by me. 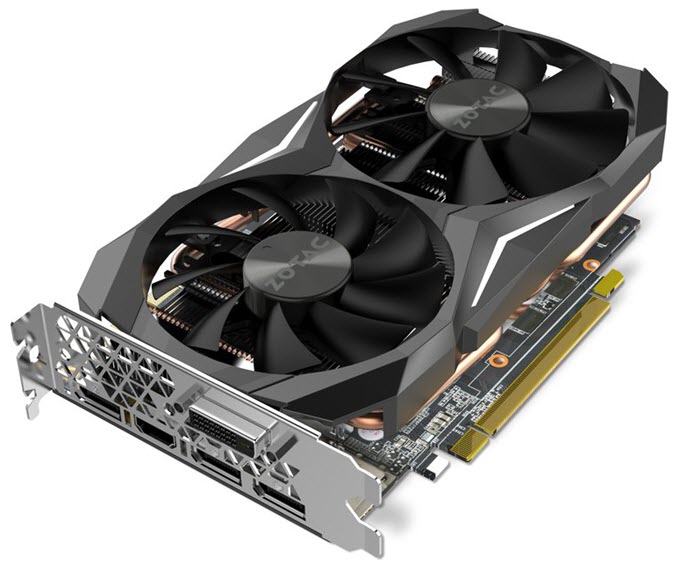 The card comes with a pretty nice cooler (IceStorm cooler) consisting of dual fans and heat sink with copper heatpipes. The cooler does an excellent job in keeping the card cool even during intense or heavy gaming. The card comes slightly overclocked but you may overclock it a bit further if you want a bit more performance. The power consumption of this card is moderate and it requires a single 8-pin PCIe power connector and a 500W PSU for its working.

Must Read: Best Compact or SFF Graphics Cards for Gaming

If you are still having some doubts over selecting the best GTX 1080 card or model for your needs then you can ask me your queries by leaving a comment below. 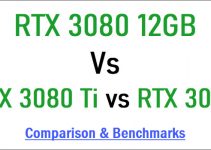