Radeon RX 6700 XT is the fourth graphics card from the top in the AMD Radeon 6000 series and is positioned just after the RX 6800. RX 6700 XT is geared mostly towards high FPS 1440p gaming but is also quite capable for 4K gaming. For 4K gaming, you may have to turn down some of the advanced graphics settings in select games to get to the respectable 60 FPS mark. The main competitors of the Radeon RX 6700 XT are the GeForce RTX 3070 and RTX 3060 Ti from Nvidia. RX 6700 XT comes packed with newer features and is also very energy efficient. Also, it comes with higher video memory than its competitors. So, if you want to find out how the RX 6700 XT competes against its competitors in gaming then I am going to tell you by taking into account all the important parameters. The comparison will help you decide whether RX 6700 XT is the right card for your gaming requirement or not. 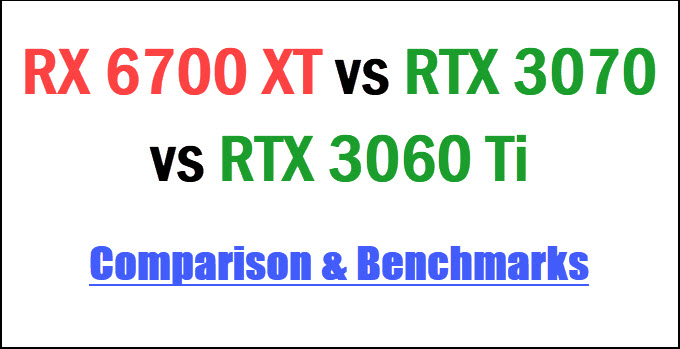 Below is the comparison between RX 6700XT, RTX 3060 Ti, and RTX 3070 graphics cards based on their specifications, performance, pricing, power consumption, and features.

AMD Radeon RX 6700 XT is built on the RDNA 2 GPU architecture on the 7nm manufacturing process. It uses Navi 22 chip and comes with 2560 Stream Processors and 40 Ray Accelerators (for Ray Tracing). Nvidia GeForce RTX 3070 and RTX 3060 Ti are built on the Ampere GPU architecture on the 8nm fabrication process from Samsung. Both cards use a GA104 GPU chip but in a different configuration as the RTX 3060 Ti uses a cut-down version and has lesser cores. RTX 3070 comes with 5888 CUDA Cores, 46 RTX cores for Ray Tracing, and 184 Tensor Cores for Artificial Intelligence (AI) related processing. On the other hand, RTX 3060 Ti comes with 4864 CUDA Cores, 38 RT cores, and 152 Tensor Cores. You should note that RX 6700 XT does not come with Tensor Cores or any other specialized processing cores for AI-related tasks or processing.

All these cards support the major graphics APIs that include DirectX 12 Ultimate, OpenGL 4.6, and Vulkan. They also support variable refresh rate technologies like G-Sync/FreeSync to reduce or prevent screen tearing in games, eliminate stuttering, and provide a smoother gaming experience. These three cards are PCIe Gen4 ready and support Real-Time Ray Tracing, HDMI 2.1, AV1 decode, and Microsoft DirectStorage API. All these cards do not include the support for multi-GPU technologies like SLI/CrossFire.

The features that are exclusive to RX 6700 XT include Smart Memory Access (SAM) and a USB Type-C connector (seen on reference card only). Smart Memory Access or SAM is generally known as the Resizable BAR and with supported processors and motherboards, it allows the CPU to access all of the graphics card memory. This can result in a major performance boost in some games, especially the high-end AAA games. On the other hand, the features exclusive to RTX 3090 are the Nvidia Reflex and DLSS 2.0 (Deep Learning Super Sampling). DLSS is a performance enhancement technology that renders the game at a lower resolution and scales it to a higher or native resolution without compromising image quality. It is achieved by using Artificial Intelligence algorithms and techniques and you can see a major FPS increase using DLSS. However, to take the advantage of DLSS, the game should include support for DLSS. 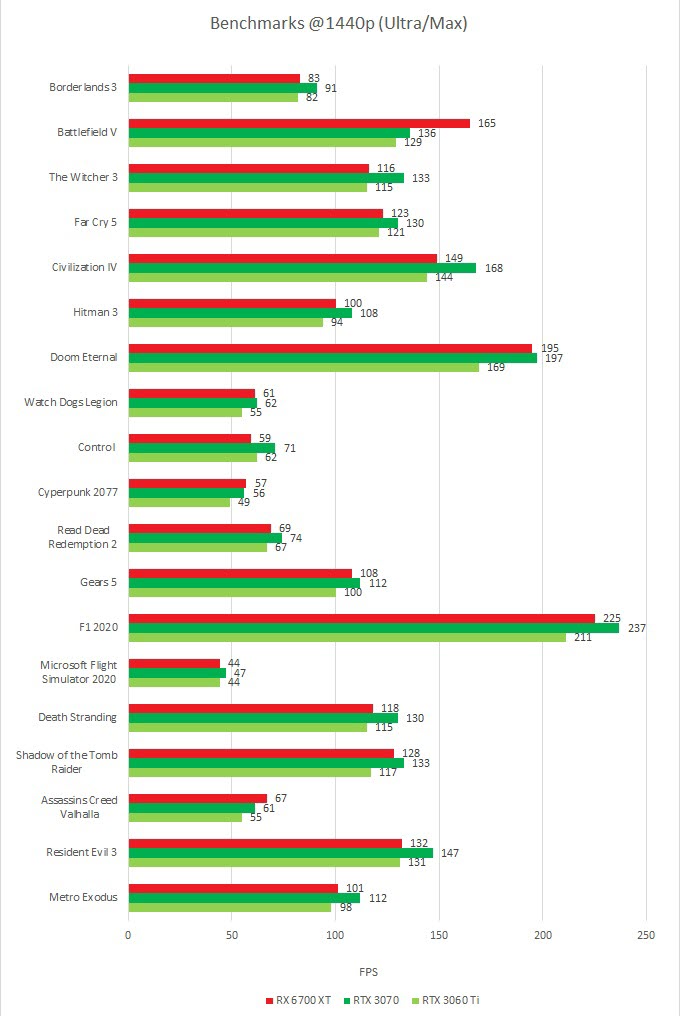 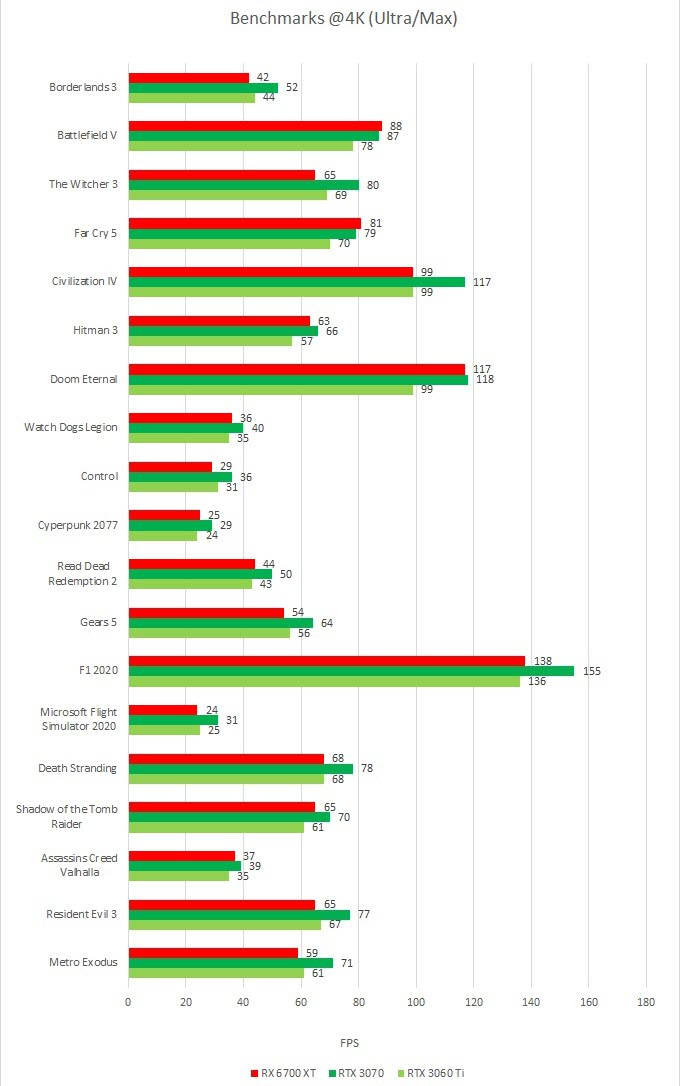 From the above gaming benchmarks, you can see that RX 6700 XT beats RTX 3060 Ti in almost all games while it loses out to RTX 3070 by almost the same margin which is around 6%.

The card with the lowest price here is the RTX 3060 Ti which has a base MSRP of $399. On the other hand, the costliest card here is the RTX 3070 which has an MSRP of $499. RX 6700 XT is priced in the middle of the two and has a base MSRP of $479 for the reference model. The custom AIB models of these cards do cost more and you can check the latest prices of these cards from the links given below.

Well, RX 6700 XT is a decent product but I think it is priced a little higher for the performance it offers. It does beat the cheaper RTX 3060 Ti but not by a huge margin and costs significantly higher than it. Also, RX 6700 XT remains behind the RTX 3070 which is an overall superior card and is only slightly pricier if we take into account the base MSRP for the reference models. The major advantage that RX 6700 XT has over both the cards is that it has got an extra 4GB VRAM that can come in handy in the latest AAA games at 1440p and 4K resolutions. Overall, I think RX 6700 XT is quite buyable, only if when you can find it at a price close to the base MSRP otherwise you should go with the RTX 3060 Ti or RTX 3070. If you have anything to add or want to express your views then you can do so in the comment section below. 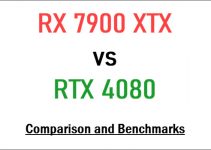 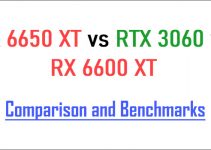 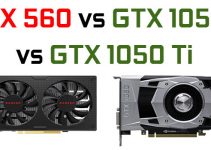