If you are looking for a super-fast 1440p gaming card that is also capable of 4K gaming then the new RTX 3070 Ti is one of the better options available in the market. It is a relatively new member in the GeForce RTX 30 series and is placed above the RTX 3070 in the series. RTX 3070 Ti is slightly faster than the RTX 3070 Ti and is around as fast as the AMD Radeon RX 6800. When it comes to pricing then RTX 3070 Ti is costlier than RTX 3070 and RX 6800 which makes it slightly less favorable in terms of price to performance ratio. Taking the price factor aside, there is no denying the fact that RTX 3070 Ti offers great performance in games and comes with all the latest features that you can find in the top-end RTX 30 series cards.

GeForce RTX 3070 Ti is built on the Ampere GPU architecture on the 8nm fabrication process. The card uses GA104 chip and comes with 6144 CUDA Cores, 48 RT Cores, and 192 Tensor Cores. The card is equipped with 12GB GDDR6X memory (256-bit) that runs at 19 Gbps delivering a bandwidth of 608 GB/s. The card supports advanced features such as Real-Time Ray Tracing, Deep Learning Super Sampling (DLSS 2.0), and PCI-Express 4.0. It is a VR-ready card and supports DirectX 12 Ultimate, OpenGL 4.6, and Vulkan graphics APIs. Other features include HDMI 2.1, AV1 decode, Microsoft DirectStorage API (to reduce game loading times), G-Sync/FreeSync, and Resizable BAR. The power consumption of the reference or Founders Edition RTX 3070 Ti model stands at 290W. Other than the Founders Edition model from Nvidia there are various RTX 3070 Ti models available from different AIB manufacturers or partners. So, here I am going to list the best RTX 3070 Ti cards based on different parameters that include overclocking, thermal performance, noise, etc.

MSI GeForce RTX 3070 Ti SUPRIM X 8G is probably the most silent and most overclocked RTX 3070 Ti card. It is the flagship RTX 3070 Ti card from MSI and I think it is easily one of the best RTX 3070 Ti models around. The card excels in every department whether it is the performance, operating noise, and build quality. It has got GPU Boost Clock of 1860 MHz which is 90 MHz more than reference. You can increase GPU Boost Clock further to 1875 MHz by using the MSI Center Software which is an MSI graphics card overclocking and tweaking software. The card employs TRI FROZR 2S Thermal Design that consists of a large aluminum heatsink with seven nickel-plated flat copper heatpipes and a baseplate that covers both the GPU and VRAM. Moreover, a dedicated copper Heatpipe is also present for VRAM cooling to help the video memory cool faster. The heatsink is cooled by three TORX FAN 4.0 fans that feature an optimized blade design and come with dual ball bearings for a longer lifespan. The card runs very silent because of quiet running fans and an optimized heatsink design that uses deflectors and wave-curved 2.0 fin edges that disrupt unwanted airflow harmonics by providing focused and smoother airflow. The Zero Frozr tech provides semi-passive cooling in which the fans get turned off during low temperatures and they start automatically when the GPU load and temperature increases. The Dual BIOS switch allows you to select between the Silent and Gaming BIOS based on your requirement.

It is a monstrous card having a length of 335mm and requires three slots in your system for installation. The build quality of the card is great and it comes with a brushed metal shroud and backplate. The metal backplate is vented at the end for allowing airflow to pass and it also makes contact with some components using thermal pads to help in the cooling process. The metal backplate along with a rigid metal anti-bending strap provides the card rigidity and protection. Moreover, a graphics card support stand or GPU holder comes bundled with the card to eliminate the GPU sag issue. The card supports MSI Mystic Light Sync RGB lighting and the RGB lighting can be seen on the shroud and the backplate. The power consumption of the card is rated at 310W and it requires two 8-pin PCIe power connectors and an 850W PSU for its working. Display connectivity options include three DisplayPort 1.4a ports and one HDMI 2.1 port.

Gigabyte GeForce RTX 3070 Ti GAMING OC 8G is probably the coolest running RTX 3070 Ti card that you can find in the market. The card has one of the lowest GPU and Video Memory temperatures compared to other RTX 3070 Ti custom cards from various AIB manufacturers. It is an overclocked card that comes with a GPU Boost clock of 1830 MHz which is 60 MHz more than the reference. The card uses WINDFORCE 3X cooling system that comprises a large aluminum heatsink with seven copper heatpipes that make direct contact with the GPU and GDDR6X memory chips for better heat transfer and dissipation. Three alternate spinning fans having optimized unique blade design cool down the heatsink and they are also pretty silent in operation. Here, the fan closest to the I/O bracket is a smaller 80mm fan while the other two are 90mm fans. The 3D Active Fan technology provides a semi-passive cooling functionality where the fans remain off when the GPU is in a low load or low power game. The card comes with Dual BIOS and there is a small physical toggle switch that allows switching between OC and Silent BIOS. The Silent BIOS works great and makes the card super quiet while OC BIOS is the default BIOS which is aimed at getting the higher performance and lower card temperatures.

It is a pretty massive cad that is 320mm in length and uses a 2.7-slot design. A metal backplate provides the card rigidity, protection and also helps in the cooling as it has vents at the end that allows air to pass through. The card features RGB LED lighting and supports RGB Fusion 2.0. Using the free AORUS Engine software, you can adjust the clock speed, voltage, fan performance, and power target in real-time according to your requirements. When it comes to power then the card requires two 8-pin PCIe connectors and a 750W PSU. Display connectivity options include two HDMI 2.1 ports and two DisplayPort 1.4a ports.

Palit GeForce RTX 3070 Ti GameRock OC also known as “The Dazzling Angel,” is a funky-looking RTX 3070 Ti card because of its crushed ice look design on the shroud. The crystalline structure design on the shroud makes this card stands out from the crowd as it gives the card a very unique look. It is an overclocked edition card that comes with GPU Boost clock of 1845 MHz, which is 75 MHz more than the reference. The card employs a massive cooler having a large aluminum heatsink with six 6mm copper heatpipes. There are three fans on the top of the heatsink that helps in the cooling of the heatsink. The fans use dual ball bearings and are very silent in operation. The card uses 0-dB Tech for semi-passive cooling where the fans remain off during lighter GPU loads and when the GPU load increases the fans come back in action and start spinning again. The card also comes with Dual BIOS and you can switch between the default Performance BIOS and Silent BIOS based on your preference.

The card is 304 mm in length and has a 2.7-slot design. A metal backplate protects the card against damage, provides rigidity, and also aids in airflow as it has vents at the end. The card is solidly built and has two die casting molded “Aluminum Alloy Armor” plates that fully cover the circuit board and are directly attached to all the hot spots on PCB. The card has an increased power limit of 330W that allows for higher manual overclocking and thus better performance. The card requires two 8-pin PCIe power connectors and a 750W PSU is recommended for its working. Display connectivity options include three DisplayPort 1.4a ports and one HDMI 2.1 port.

Well, there are no small form factor RTX 3070 Ti cards available but if you are looking for a relatively shorter and slimmer RTX 3070 Ti then GIGABYTE GeForce RTX 3070 Ti EAGLE 8G is one of the best options available. The card is 283mm long and has a 2.2-slot design that makes it compatible with most of the mid-tower and some of the smaller PC cases too. It is a non-overclocked RTX 3070 Ti card and comes with a GPU Boost frequency of 1770 MHz. The WINDFORCE 3X Cooling System consists of an optimized aluminum heatsink with six copper heatpipes that make direct contact with the GPU. The heatsink is cooled by three 80mm fans having a unique blade designed for optimizing air pressure and airflow. The fans are alternate spinning where the middle fan spins in opposite directions than the two to reduce air turbulence, increasing air pressure and smoothing out the airflow. The 3D Active Fan tech on the card provides semi-passive cooling functionality where the fans get turned off during lighter loads and start automatically when the GPU load and temperature increase.

The card comes with a protective metal backplate that enhances the structural integrity of the card and has vents at the end for optimizing airflow. The card supports RGB Fusion 2.0 and the RGB LED lighting does not look very loud. For power, it requires two 8-pin PCI-e power connectors and a 750W PSU for its working. The card offers two HDMI 2.1 ports which is an added advantage because most other RTX 3070 Ti cards come with only one HDMI 2.1 port. Moreover, it also has two DisplayPort 1.4a ports for video output. Using the Gigabyte AORUS ENGINE overclocking software, you can customize, tweak and monitor various parameters and get the most out of this card.

Note: Another relatively smaller RTX 3070 Ti Card is the EVGA GeForce RTX 3070 Ti FTW3 ULTRA GAMING that is 285mm in length and has a 2.2-slot design.

Well, there is no doubt that RTX 3070 Ti is a pretty amazing card for fast 1440p gaming and moderate 4K gaming. It may not be that competitively priced but it is not expensive either. Most of the custom models of the RTX 3070 Ti card are very good and offer a bit more performance and features than the Founders Edition. The above-mentioned RTX 3070 Ti models are selected carefully with lots of research and you cannot go wrong with any one of them.  However, if you still are having a hard time selecting the right RTX 3070 Ti card for your build then you can clear your doubts with me using the comment section below. 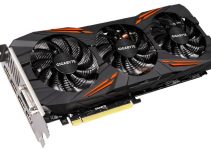 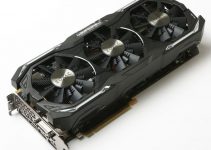