Here are the best single slot low profile graphics cards from Nvidia for use in SFF Desktops.

GeForce GT 710 is an entry-level graphics card from Nvidia built on the Kepler GPU architecture. The card comes with 192 CUDA Cores and 1GB / 2GB DDR3 video memory. This graphics card is way better than the most integrated graphics solutions and can be used to play older games like Counter-Strike, Cold Fear, Splinter Cell, etc. Also, this is a great cheap graphics card for a low-cost HTPC setup and setting up multiple monitors at your workplace or home. 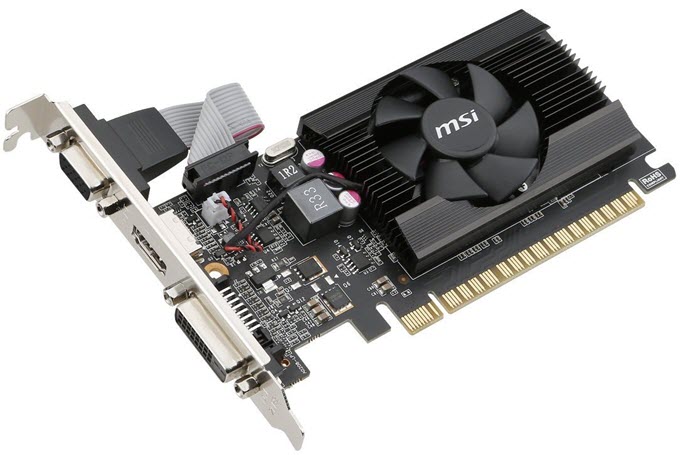 Here we have MSI GeForce GT 710 2GD3 LP which is a single slot low profile graphics card and comes with 2GB DDR3 video memory. The card comes with an active cooling solution with a black heatsink and a small fan in the middle of it. It is only 146mm in length and can fit in almost all of the small form factor computer cases whether low profile or not. The card does not require external power and needs only a 300 Watt PSU for its working. The Connectivity options for this card include VGA, DVI, and HDMI ports.

P.S. – If you want a passively cooled low profile single slot GT 710 card then I would suggest you get Zotac GeForce GT 710 1GB DDR3.

GeForce GT 730 is a much more powerful graphics card than the GeForce GT 710. There are three variants of GT 730 graphics card, one with 64-bit GDDR5 memory, another one with 64-bit DDR3 memory, and the last one with 128-bit DDR3 memory. The models with 64-bit GDDR5 / DDR3 memory come with 384 CUDA cores and are based on the Kepler GPU architecture while the 128-bit DDR3 version has got only 96 CUDA Cores and is based on older Fermi GPU architecture. Here we have the GDDR5 version which is the most powerful of all three GT 730s and is a good budget graphics card for casual gaming, HTPC, and for multimedia. You can play games like CS: Go, Far cry, and COD comfortably on this card with playable frame rates. 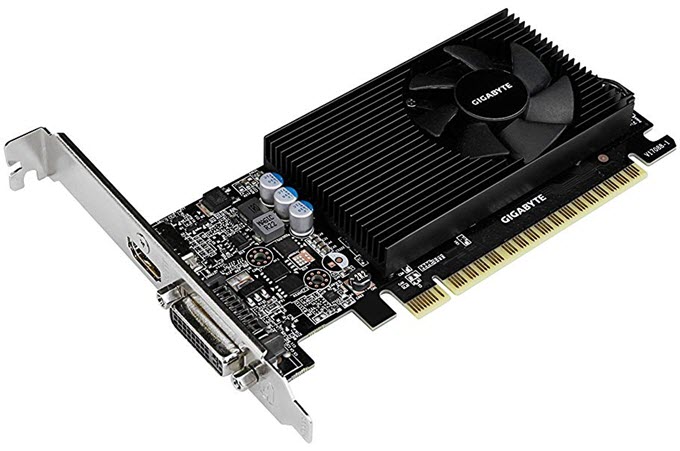 Here we have Gigabyte GeForce GT 730 2GB GDDR5 which is a small form factor graphics card and is both low profile and single slot in size. For cooling, the card comes with a black heatsink and a small fan in the middle. The card is only 149.88mm in length and has no problem fitting in most of the mini-ITX cases or SFF cases. It does not require external power from the PSU and only a 300W power supply is enough for it. Connectivity options for this card include DVI and HDMI ports. The Model Number for this card is GV-N730D5-2GL.

GeForce GT 1030 is a powerful budget graphics card and an entry-level graphics card in the GeForce 10 series. This is the most powerful graphics card that you can get in a low-profile single-slot form factor. The card is built on the Pascal GPU architecture and comes with 384 CUDA Cores. It comes in two variants, one with GDDR5 memory and another one with DDR4 memory. The DDR4 version has a much lower memory speed and its performance is literally half of the GDDR5 version. So, you must avoid the DDR4 GT 1030 at any cost. 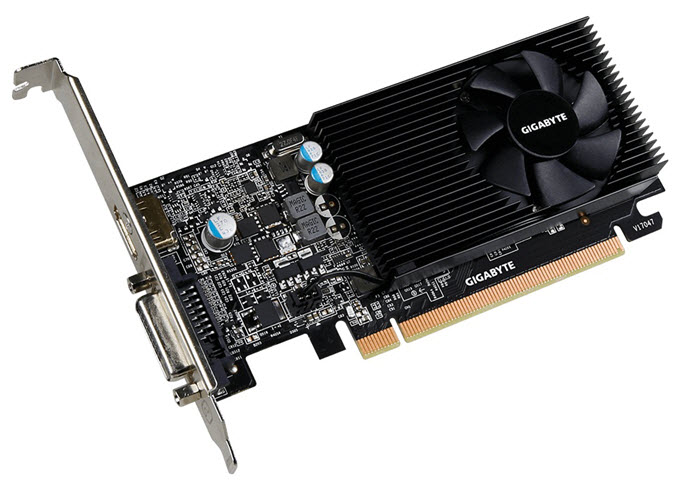 GT 1030 GDDR5 is a great card for low-budget gaming and is powerful enough to run games like GTA 5, Rise of the Tomb Raider, CS:GO, Far Cry 5, Prey, and Assassins Creed Syndicate on medium graphics settings at 720p / 900p / 1080p with playable frame rates. It is also a very good card for eSports gaming, HTPC, 4K display setup, and video editing on a budget. Here we have Gigabyte GeForce GT 1030 Low Profile 2G which is the best low profile single slot graphics card as of now. The card comes with 2GB GDDR5 VRAM and uses a low-profile fan and heatsink for cooling.

Another good thing about this card is that it is only 150mm in length and can fit in any small form factor PC case. This is an OC version and can be overclocked to slightly higher clock speeds for extra performance via the AORUS Graphics Engine utility. The power consumption of this card is on the lower side too and it draws all its power from the PCI-E x16 slot. The recommended PSU for this card is 300W. Display connectivity options include DVI and HDMI ports.

Here are the best single slot low profile graphics cards from AMD for use in small form factor PCs.

Radeon R7 240 is an entry-level and relatively older graphics card from AMD. The card is based on the older GCN 1.0 architecture and comes with 320 Stream Processing Units and up to 2GB GDDR5 or DDR3 video memory having a 128-bit interface. This card is faster than the Geforce GT 710 from Nvidia and it can be used for older SFF PCs, HTPC, Blue-ray playback, setting up multiple monitors, playing older games like Counter-Strike, Max Payne, etc. 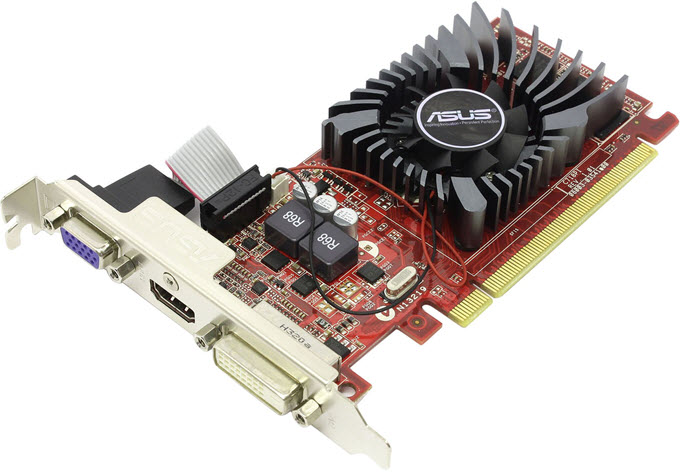 Here we have Asus R7240-2GD3-L that comes with 2GB DDR3 memory with 128-bit bus width. This is a pretty small card with a low profile heatsink and fan and can fit in almost any small factor PC. Like other single slot low profile cards, it does not require external power and includes VGA, DVI, and HDMI display connectors.

Radeon R7 250 is the bigger brother of the above-mentioned Radeon R7 240 card. It is based on the same GCN 1.0 GPU architecture but comes with 512 Stream Processors and up to 2GB GDDR5 / DDR3 memory. The GDDR5 version of this card packs a decent amount of power and it is faster than the GeForce GT 730 card from Nvidia. The card is more than capable of running games like GTA 4, Far cry 2, CS:GO, Assassins Creed, etc. It can also be used for HTPC, Blu-ray playback, and multiple monitor setups. 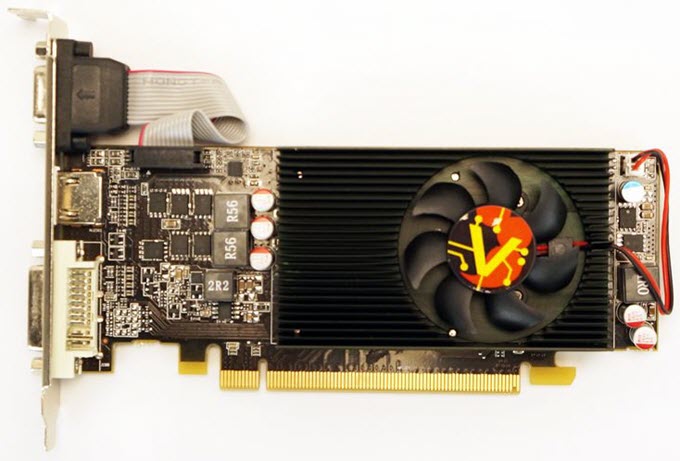 Here we have VisionTek Radeon R7 250 Low profile single slot card that comes with 1GB GDDR5 having a 128-bit interface. A black heatsink and small fan cool down the card effectively. It does not require any PCIe power connectors and needs a 400W PSU for its working. Connectivity options for this card include VGA, DVI, and HDMI ports. This is one of the best single slot low profile graphics cards that you can get from AMD.

One of the most powerful single-slot low-profile graphics cards you can get is the Yeston AMD Radeon RX560D-4GD5 LP. Yeston is a Chinese brand but offers good affordable graphics cards. Radeon RX 560 is a powerful budget graphics card based on the Polaris GPU architecture on the 14nm architecture. RX 560 comes in two variants, one with 896 and the other with 1024 Stream Processors. The Yeston AMD Radeon RX560D-4GD5 LP comes with 896 Stream Processors and 4GB GDDR5 memory running having a 128-bit interface and running at a speed of 6000 MHz. 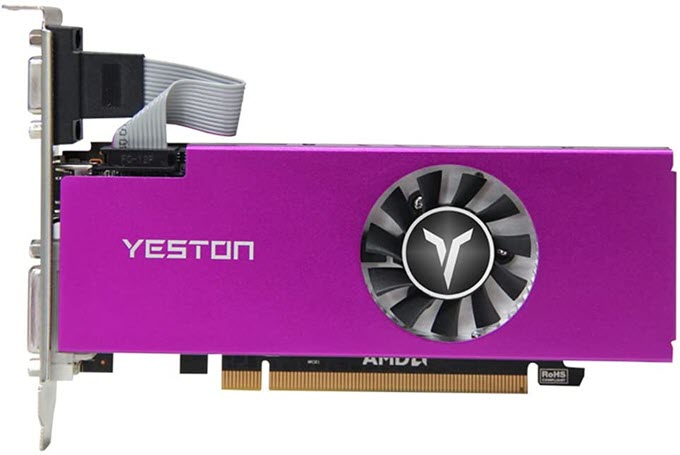 For cooling, the card uses a slim aluminum heatsink and a 50mm fan. It is only 170mm long and 20mm in height and because of such small dimensions, it can fit any small form factor, slim or mini-ITX case. The pink color on the metal shroud looks very eye-catching and fancy. On this card, you can play older games at medium-high settings and the latest games at low to medium settings at 720p or 1080p resolution, depending on how graphics-intensive the game is. The card is up to 30% more than the GeForce GT 1030. The power consumption of the card is very low at 50W. Display connectivity options include VGA, HDMI, and DVI-D ports.

Yeston RX 550 4GB Low Profile is one of the fastest single slot low profile graphics cards, and can even beat the GeForce GT 1030 2GB GDDR5 low profile. Radeon RX 550 is a budget graphics card from AMD based on the Polaris GPU architecture. The card comes with 640 Stream Processors and 4GB GDDR5 memory (max.) having a 128-bit interface. Radeon RX 550 performs slightly better than the GeForce GT 1030 and also has the advantage of having an extra 2GB of video memory. It is a pretty good card for eSports gaming and can play most of the games (especially older) at 720p/1080p on medium-high settings with playable frame rates. 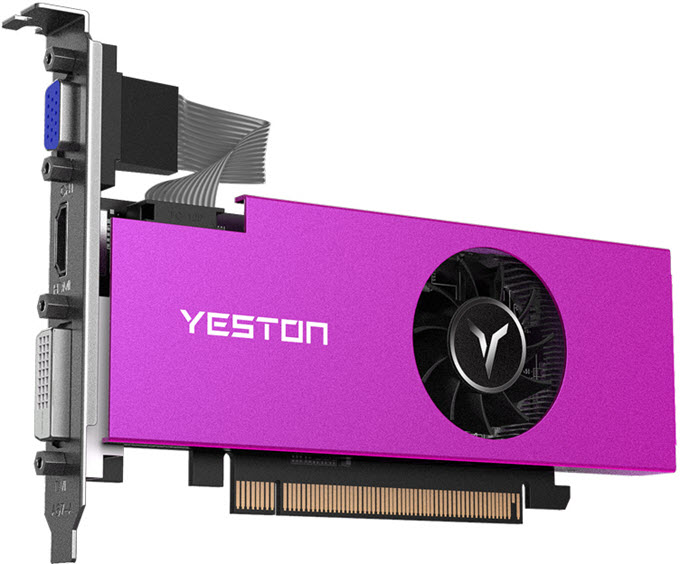 The Yeston RX550-4G LP D5 card uses an aluminum heatsink and is cooled down by a 50mm fan. The top of the card has a pink color metal shroud that looks quite fancy, and it also helps in further heat dissipation. The card is only 170mm in length and is excellent for use in mini-ITX and slim cases for building an HTPC or small form factor budget gaming PC. The power consumption of the card is rated at 40W, and it does not require an external PCIe power connector. The recommended PSU for the card is 300W. Display connectivity options include VGA, HDMI, and DVI-D ports.

Note: The availability of the card is a concern but you can find it easily on AliExpress online.

The fastest single-slot low-profile you can get for small factor mini-ITX and low-profile slim PC cases or systems. Radeon RX 6400 is the smallest card in the AMD Radeon RX 6000 graphics card series and the second graphics card after the RX 6500 XT to be built on the smaller 6nm fabrication process. The card is built on RDNA 2 GPU architecture and uses Navi 24 GPU in a cut-down form. RX 6400 comes with 768 Stream Processors and 4GB GDDR6 memory having a 64-bit interface running at a speed of 16 Gbps. The card also uses a 12MB Infinity Cache which is an ultra-fast memory cache that can deliver much higher peak memory bandwidth.

The card has very low power consumption and draws all of its power from the PCIe x16 slot. When it comes to features then the card supports HDMI 2.1, Directx 12, OpenGL 4.6, Vulkan, FreeSync, FidelityFX Super Resolution (FSR), Real-Time Ray Tracing, PCIe 4.0 (at x4 bandwidth only) but lacks H.264/H.265 encoding and AV1 decoding. The performance of the RX 6400 is comparable to the GeForce GTX 1650 from Nvidia and in some games, RX 6400 does perform significantly better than GTX 1650. It is a great card for running older games at high graphics settings at 1080p resolution and you can even play the latest games at medium settings at 900p or 1080p with playable frame rates.

Here we have Saphire PULSE AMD Radeon RX 6400 which is a single-slot low-profile model from Sapphire technologies. The card is 170mm in length, 56.2mm in width, and 17.2mm in height. The cooling solution of the card features a low-profile aluminum heatsink and a smaller single fan that helps to keep the card cool. The card has a maximum power consumption of 55W and requires no supplementary power from the PCIe connectors. Display connectivity options include HDMI 2.1 and DisplayPort 1.4 ports.

Below are the workstation single-slot low-profile graphics card that can also be used for gaming. Even though these cards are targeted and optimized for use in professional or creator software, they can still deliver good performance in gaming too.

Low-profile single-slot graphics cards can be very useful in reviving your old SFF PC but they are very limited in options. These cards are definitely more powerful than the older generation onboard graphics and can be used for playing older games and for HTPC use. These cards are also very low on power consumption and they do not require any kind of external power connectors from PSU for their working. Above I have mentioned the best low-profile single-slot graphics cards to choose from. If you have doubts or queries regarding them then ask me by leaving a comment below. 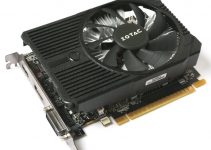 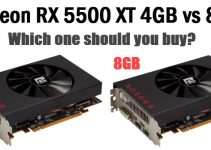